Art does not Equal Money 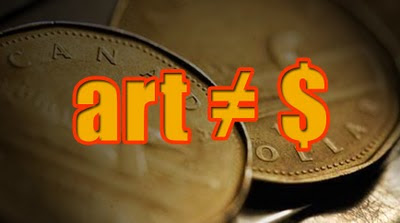 One comment I hear quite often, bothers me quite a bit. It’s when someone shows they have an artistic talent, makes the mistake of showing people, and then have to hear comments like, «You should sell your art and make millions!». I know it seems like a completely positive thing to say, but the reality is it just makes the artist feel like a total loser.

Why? Think about it... how realistic is that statement? If someone could make a million dollars doing something they love that easily.. wouldn’t they be doing it already? Almost all those making the statement don’t buy art themselves... where do they think these «millions of dollars» will come from? As a result the artist ends up thinking they have somehow failed in exploiting their talents or worse, they think that they actually can make tons of cash and will crash into depression when they discover winning the lottery is more likely. The statement also devalues the personal statement and drive to make the art into a simple product anyone can make and sell.

Success, the type of success these comment speak to, is extremely rare in the art world. For every Andy Warhol, there are 2 million people who never even get a chance to show their work, no matter how fantastic it is, in the local café. Face it, the most successful artists are dead ones.

The same is true for creative jobs, like I have. If you are anyway involved in making movies or TV shows, you are assumed to be raking in the dough. A film like «Avatar» might cost ½ a billion to make, but that doesn’t mean each technician made 1 million each. In fact many make less salary than your average person despite having very rare and specific skill sets that involve constant retraining and experimenting to keep up to date. I might charge 50$ an hour for contract work, which seems like a lot until you realize getting 40 hours of paid work a week is actually impossible, that my computer system to do the work cost 5 000$, that the software to do the work costs even more, plus updates every 18 months... you see what I mean. Also a small filmmaker like myself will work alone for years on a film that will costs hundreds of dollars (not including time and already existing hardware etc) and they won't even make that money back.... ever. No matter how many hits they get on Youtube.

It’s perfectly reasonably to want to make such hopeful (yet misguided) statements to someone who’s work you admire. Most people work in offices, where many things, like the cost of software and hardware for example are covered by the company and never thought of. So unless you have a way to get this creative friend of yours into a situation where they can actually make some money off their talent, please refrain from making them feel it’s a given they will, or worse, that it’s their fault somehow that they haven’t done it already. Instead, if you like it that much, offer to buy it for a reasonable price for the time and effort put into making it. Now THAT would be a true compliment!
Posted by Behemoth media at 08:14 No comments:

Posted by Behemoth media at 19:20 No comments: