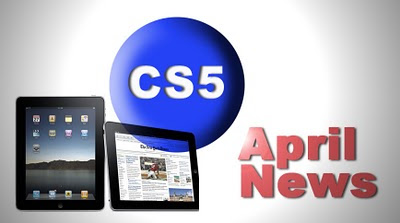 There are some pretty interesting things going on in tech April. None of them are affordable to be right now because work is so bad, but we can dream.

Of course you’d be living in a cave if you didn’t know the Ipad was coming out. Press has changed from «just a big iphone» to a must have device as it’s uses are more apparent. I don’t have an Iphone, nor an Ipod Touch so for me it would be a great little device for trips or sitting in front of the TV to catch up on emails and a great device to show off work to clients. I like that you can use pages and Numbers with it as it means I could update my blogs and write on it while away, making bringing the laptop less obligatory on short trips. Like the Ipod when it came out, it will take a little time for people to realize what they will use it for... but I have a feeling it will get used!

Abobe releases CS5 soon too, though photoshop has the splashiest updates and it seems, most of the updates released to press so far, it’s still not on my must buy or die list. For one thing, CS4 is still not showing text correctly on my tower and Adobe has made very little effort to solve the issue. You might say they’ve made a negative effort even, just sending me links to «fixes» that don’t apply to my situation and in one case, was not even for my OS! I also have a feeling that the price will be too high, but in this economy, almost any price is to high as it is. Some of the features, like mixing colours as you would paint are pretty amazing and the «Intelligent fill» which is a follow-up to the «intelligent scale» form last time looks very impressive. Like the last time though, impressive as the tech is, in real life application, you will find yourself looking for ways to use these features rather than them filling some need in the everyday workflow. I imagine the new fill will be like the old scale in that it will work well in very specific problems that fall into certain parameters but in many cases you’ll fall back into using whatever techniques you were doing all along. In situations that do warrant the function, however, it will be amazing and fast. Another problem with Adobe updates is they come too quickly lately. Most printers are still on Adobe CS2 for InDesign, making it impossible to use those features in many projects as you can only save to the previous version and only if you don’t use any new features. I haven’t seem much on Dreamweaver as far as improvements go, another sign that once Adobe bought out the competition, they let just let the Macromedia products wither. Except for Flash, of course, which they have totally turned into a monster no one wants to deal with now.

After settling some Final Cut Pro issues, I think I’d update to the new version of that, which is really well priced before buying any of the new stuff this April. For once, I’ll let other get burned and adapt late!
Posted by Behemoth media at 08:57 No comments: