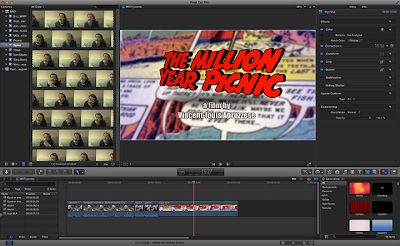 Several years ago I had the chance to work with the beta version of Final Cut X, the replacement for Final Cut Pro Studio, Apple’s very efficient (but now dated) professional video editing software. Sadly, it was a giant mess and not even close to being a professional product despite having some innovative new features. Where do I stand on it now?

Having received the new version s a gift to help me work on my new documentary, I decided to spring for the video tutorial class with Ripple Training, something I would highly recommend as a time saver. My first impression is that it hasn’t changed all that much (in look and feel anyway) and a few of the things that bothered me were still front and centre. Other, more important things maybe, had changed in very substantial ways. The most noteworthy improvement is the way you handle media now. A film is a collaborative effort between not just other people, but other softwares so the « iPhoto » method in previous versions made it unusable for most projects. The new library and improved keyword functions go a long way to fixing those issues. You can now save your project to external disks and open it on other computers easily, letting you work on a laptop, another studio, at home… where ever. Handling of media, especially new digital camera formats seems second to none at the moment. You will need a plugin for some formats like RED, but most conventional footage is handled natively and efficiently. The lack of useful plugins and features has been largely addressed, but not completely. The sound features, while not stellar, lets you sync clips to external video (I did have problems with a few and returned to Pluraleyes for more complicated files) and the reduce noise noise and reduce hum features are fast and useful but not totally professional grade. The magnetic time line can be a time saver but it does have its drawbacks as well. They have addressed some of the lack of sequences problems with « compound clips » which in many ways a useless renaming of the term sequences to appear they haven’t caved in to the need for this feature and are giving you something new. Colour correction is still basic but not bad and easy to handle.

On the negative side, the scrubbing tool can be a nightmare, I have it off more than on and it’s still not possible to organize a project’s clips in a way you like, but just in the way Apple has decided for you. For me, this means lots of wasted time getting things set up. I do like the key wording a great deal in this version but to be honest the whole FCPX release fiasco could and should have been avoided by rolling the best features into the old Final Cut Pro and keeping to editing conventions… this « new paradigm » offers nothing the old one didn’t have covered and changing the names of things is more about appearing innovative than actually being innovative. It is clear with this version, however, that Apple has listened to the complaints from professionals and has started to back away from its « my way or the highway » approach to what is a very personal field of work that needs to be a lot more flexible to personal workflows. The program does crash, but not very often and there are bugs, like spotty playback from time to time that requires rebooting the computer to get it right again. Round tripping to Motion is still not possible. (Motion itself is almost unchanged since it’s earliest version and while useful, it is still extremely slow with some more complicate tasks like 3D and emitters so it’s in no way a replacement for After Effects but it is a good extra tool to have in your arsenal.)


I will be using FCPX, reluctantly, for my future projects despite its current deficiencies since it’s strong points are finally starting to outweigh to the weak ones. At the pace it’s developing it will be still be another couple years before it’s really something I will be happy to work on, but its getting there.
Posted by Behemoth media at 08:26 No comments: