I am not a gamer, not by any stretch of the imagination. Occasionally I will find something I like and try it out but I am more likely to replay Myst or Riven (the other game sin the Myst series are only not available on the MAC) than add a new game to the list. I like the video game world(s) but not the gameplay. I love the idea of being able to explore a fantastic place, discover things but I have no desire to kill, decapitate or explode 100s of zombies, creatures or whatever and certainly have no desire to have those things happen to me. I love great graphics, mood and presentation over violence and action. In other words, take anything I say about any game with those grains of salt. 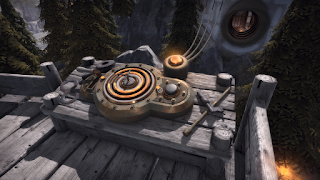 While waiting for Obduction to be released, I came across another game in development that promised to be Myst-like in nature and was intrigued by the artwork I saw. It was to be released in November and Obduction in August, several months ahead of it. As it turns out, I have finished Quern and Obduction seems no closer to being released for the MAC than it was in August. So how is the game?

If you like Myst, you will like Quern. It’s basically an updated version of the old game. The artwork, puzzles, and music is all VERY similar. That, however, is not a criticism in the least bit. While the puzzles are not so integrated into the story as in the games that inspired it, they are more than delightful enough to work your way through. Some of the set pieces are stunning and even surprising. For an independently produced video game, the creators really made a huge effort to impress and they do. 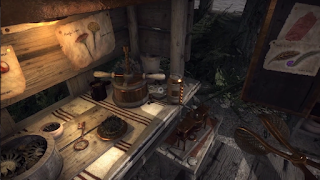 The game play is very simple, but not without quirks and even a few bugs. You can take notes but the resolution is low and they are not really much help. Pen and paper will be needed. I got stuck at one point and contacted the developer and they were great in helping me. Yes, it was a bug and when it couldn’t be fixed immediately they sent me a file taking place just after the puzzle needing to be solved so I could continue. We are talking only several hours before I was back to the game again.

Speaking of puzzles, I like solving them to a certain degree but after a time a few get tiresome and I just look at a walk through to get past them. Same thing is there are millions of steps, and Quern does have several puzzles that require far too much back and forth for my tastes. I play these things to relax, not get aggravated and frustrated so I feel perfectly justified in « cheating » when it keeps me from getting angry at the game.

The story is bare bones, typical puzzle adventure game stuff. Well thought out - but not eye opening or too surprising. Like the game it pays homage to, there is a choice to make at the end but unlike that game, the choice does not really change the ultimate outcome. That’s about all I can say without being too spoiler-y. I did hit a small bug at the end that made me think I had really screwed myself, but it cleared up. (A door that was open was closed but turning around and going back it was suddenly open again.)

Cons:
a couple bugs, no built in hints (which I think are essential for this sort of game) a weak ending.

* I would also liked to have the chance to just walk around the environment, like the old Cyan games did after finishing the story and be able to discover little hidden places and extras that don’t affect the game in any way. That is a lot to ask for in indie project, though.

WillI I buy an almost certain sequel? Absolutely! After accomplishing so much with this, I imagine the developers will only get better and produce something even more intriguing.
Posted by Behemoth media at 10:18 2 comments: 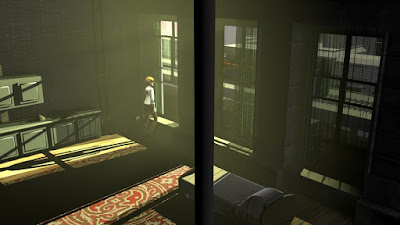 All three of my Lovecraft animations are being shown in the CYBERIA VR Film Festival (click for time and instructions on how to see them. Be sure to comment and tell them how cool they!  :)
Tell as many people as you can!

BigMa was what we called my mother's mother while she was alive. I made a documentary about her many years ago.

Recently my mother found and old photo of her she wanted me to restore and print for her. Oddly I had a copy of this photo already, but it was a scan of a photo copy I used in the title credits of the film so when I had the chance to work from a much higher resolution scan of it I was really happy to do it.

For years I worked with PBS on a few American Experience episodes (won 2 Emmys and a Peabody Award on those projects yet somehow haven't had any more work from them in years) restoring and animating images and I LOVED doing it. This little thing for my mom made me realize how much I love to bring back old photos to their former glory. 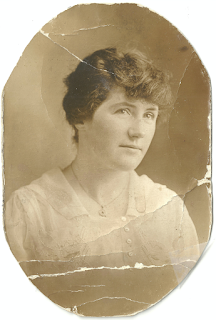 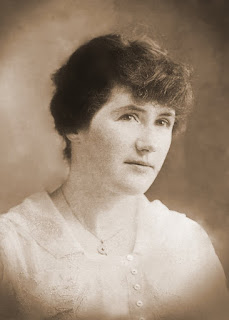 I could have taken this even further but there is a point where only I will ever see the work I did in the restoration. I have a very precise series of steps I do when restoring something. I start fixing the largest problems first which are usually tears and missing body parts. If I have access to other photos from the same period of the same person, I can usually replace a hand or arm or eye, there are limits of course. I will then clean up the dust and stains, by hand. If there are big black sections with dust and scratches I might selects only the black and run a dust an scratches filter to save time, but only in areas of solid black.

Lastly I will convert it to black and white (if the photo was in B&W to begin with of course) and then add back in the sepia tone if the client wants it.
Posted by Behemoth media at 09:24 2 comments: