The last time I did a honest to goodness 2D drawn animation was when I was a teenager. I had built my own animation stand, filmed it with my Bell & Howell Super 8 and edited on my hand cranked film editor.  That animation was a dragon catching the wind then swooping down and then upwards past the camera. I made a pipe cleaner model with plastic bag wings and photographed it in the key frame positions for reference. I sketched it out on paper then inked one side of plastic sheets and hand painted the colours on the opposite site one by one before adding a painted sky and placing them over that to be filmed. It was FANTASTIC. Well, I remember it being fantastic. It's been lost to time so I have a feeling my memory of it has been more than slightly enhanced over the years.

Times have changed, for the better with computer based animation software. I was going to redo that dragon but instead I decided to try a new idea using one of the many (it turns out) application on my hard drive that can handle 2D animation. I have done some 2D for explainer videos more recently and to add something to3D animations that I couldn't achieve using that software. Out of practice - but not unaware of what I was getting myself into.

After Effects, Motion, Krita, Rough Animator, Photoshop, Procreate, Blender all have 2D potential and components. Rough animator seemed perfect but it was... too rough for what I wanted. I think I will use it for what it is named to do, to make rough tests, in future. The others were Ok if you were mostly using puppets, characters broken into segments and then moving the segments, but Krita has an awesome set of painting tools so I decided to try it out. It had much of what I was looking for and the interface was clunky but easy for me to understand. I got about a second into the animation when I had to stop. Krita was just too slow and buggy in animation mode, it needs some love from the developers still. I will keep an eye out for improvements. 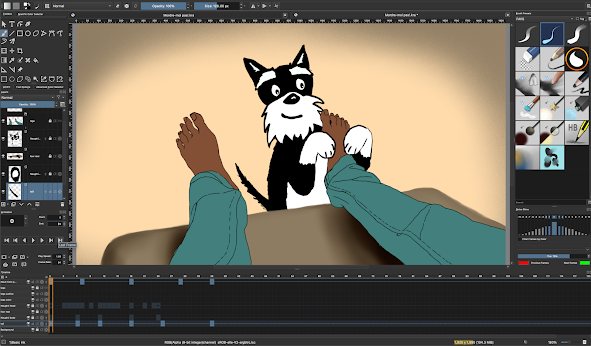 I had downloaded but never really used Open Toonz, a free open source software that had a really large feature set. I would love to have a copy of Toon Boom but it's subscription only and not cheap enough to play with so Open Toons won out. It was faster and handled the layers and number of frames better than Krita but it lacks all but the most basic of drawing tools, something that I think is its biggest problem. Any backgrounds or elements that need any detail of refinement I would do in a paint program and import them.

Though buggy at times, the eraser doesn't always work and the interface is somewhat primitive and one might say ugly, it does do the job. It has vector tools, puppet tools, great onion skinning to see what came before and after you current frame and was free. Exporting is funky and you need an add-on to export to mpg video while jpg and tif exported fine, png which I needed to use dropped a few frames on my first export. Clearly it still needs work but it also provides pretty much everything I needed to do the animation. 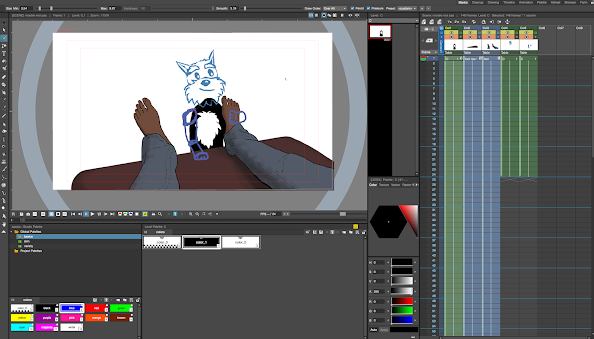 I split Nauti into a frame by frame drawn head, while the body, arms and tail were puppet animated as were the legs. I did a rough sketch animation and then traced that and coloured it before exporting the animation in sections so I could composite it in layers in Motion. It was a pretty straightforward work flow. Originally I thought I wanted a black and white pencil sketch look but decided that something more "fully rendered" would be a better challenge.

So is it a Disney classic? Hardly. Not at all. That wasn't the point of making it, though. I learned many things about Open Toons and 2D animation. I am not a comic or cartoon illustrator so just making the dog was pretty hard and I found timing in 2D was more different than in 3D than I thought it might be. My voice is as terrible as ever but this is not an audition for my voice talents so it's fine for now.

I will make another, either another Nauti or maybe I will remake my dragon masterpiece. I need to do more and better pencil tests next time, learn more about timing and setting up Open Toonz, and get better with the drawing tools in Open Toonz as well as draw in comic style better. 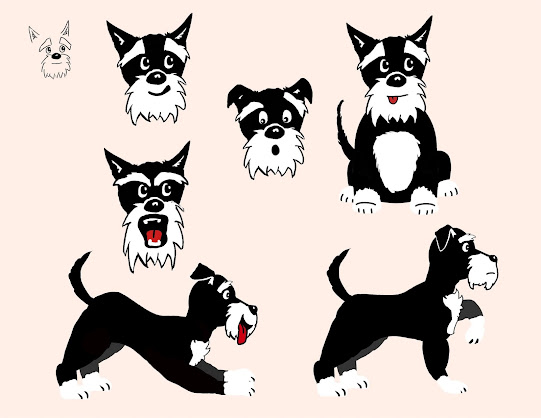 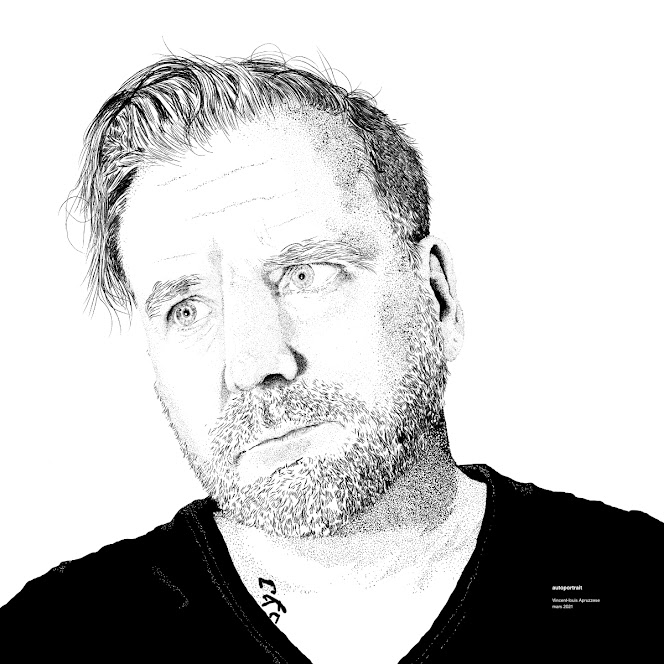 So this is something I have never done in my memory - drawn myself. I have drawn plenty of others and animals and places etc but never myself.

Took a week doing it at night before bed. The reference is from a  series of photo self portraits, which is something I do reluctantly every few years but I wanted to do something different this time.

It's pretty simple and basic. Stipple for the skin tones and lines for the rest. I did a little extra work in Affinity Photo because I usually add the title and my name there and noticed that the right cheek was a mess and needed more stipple work to blend it better. The is black fill with white stipple to give it some added detail.

I avoid looking in mirrors so this was sort of weird, looking at my own face for hours. I think the beard came out well and the hair isn't bad and that is usually what throws me off the most.