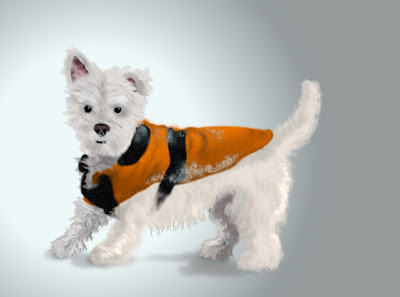 paint what you love...
I should take a break before I get too obsessed (and disappointed) with my attempts. I want to do a pen and ink on real paper next anyway. Click to see more details in the digital painting.
Posted by Behemoth media at 09:38 4 comments:

After getting the iPad so recently, it was a huge surprise when I received a Wacom tablet as gift. I had an old tiny one that bit the dust a few months ago. I never like using it but I know many artists who can't live without one. I figured I just was having a hard time getting a grip on how to use one. One of the reasons for iPad was to use it as a sketchpad so I was not prepared to make such a step up so soon.

The intuos5 I have now has completely changed my attitude on using a tablet. Having a great tool really makes a difference. The first day I produced 6 illustrations for a book in a pen and ink style. I've never even tried to do anything in color or like a real painting on the computer before but I've always wanted to try. So using a photo I took a long while back as reference I did this bee painting (above) in about an hour. It might not be a great work of art, but I am very happy with the results.

I have the medium sized model and I reccomend this size as it makes navigating the pen across the screen much easier than a smaller tablet. The multitude of programmable buttons I have only started to explore the uses of, but I imagine I will find them all very useful.

The tablet works with most software, as a pen or brush, a mouse or as better way to control and construct cgi animations. Sketchbook Express comes as a free download and it is an amazing program for drawing. I do find photoshop, with it's hundreds of options harder to draw with but more useful overall. In the end I am sure I will be using both as you can edit PSD files in both.
Posted by Behemoth media at 08:00 2 comments: 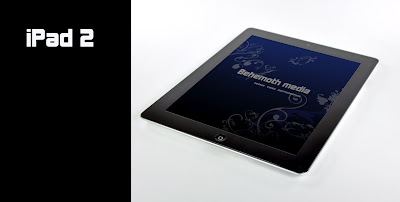 After having no interest in buying a tablet the last two years, I suddenly found myself finding that the compact size and long battery life of these devices were something I could use more and more. With release of the new iPad, the iPad 2 was dropped in price 100$ and was a little more affordable. While 16 gigs are not a lot by today's standards, it does allow enough space for light usage.

My iPod had 64 gigs of storage so I had decided before I bought the iPad to not put music on it and only video I would be using immediately. The 16 gig restriction is a little annoying, I would have liked the chance for a 32 gig, but apple isn't offering anything larger unless it's the new iPad.

After a week of using the device, it is easy to see why it has become such a popular device. It is much faster than a phone or iPod using the wifi, playing games and anything else a small portable device is used for. I don't find typing on it particularly difficult as I had been lead to believe in many reviews I had read. Even more surprising was how useful it is for drawing and sketching using the sketch-up app and a Wacom stylus. It is not super precise, but considering a Wacom tablet with built in screen starts at 1000$, it is a pretty impressive tool to have at this price.

I am not a big gamer, but I do like adventure games and I was eager to see Riven on the iPad. It played great and the enlarged images are ok but the video is fairly pixelated. So when possible I would recommend getting HD games made for the device over iPhone versions when price isn't a barrier.

The 2 cameras, as with the iPod touch, are horrible. Video chat on Skype is not bad, I don't want or expect film quality there, but even as portable camera the images are too grainy. Using an iPad as a camera or video recorder is awkward to say the least. I would rather see more storage space, larger battery or lower price in place of the rear camera.
Posted by Behemoth media at 13:06 2 comments: 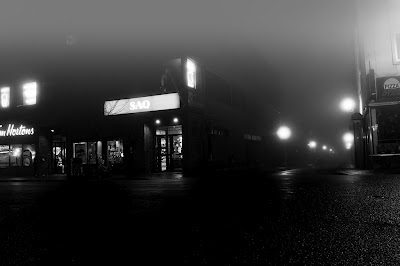 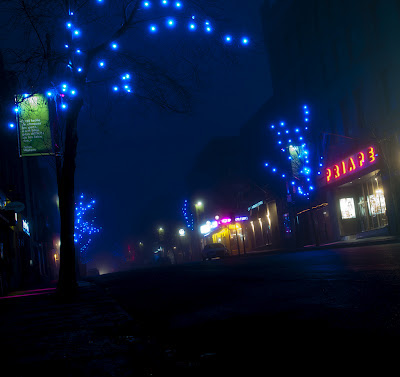 For Danny. :)
He likes it so I'll share it here as well. I am mostly happy with it. If it were fro a TV show opening or something I think I would rework the model textures, there are some overlapping ones that cause strobing which makes me crazy.
Posted by Behemoth media at 14:22 1 comment: