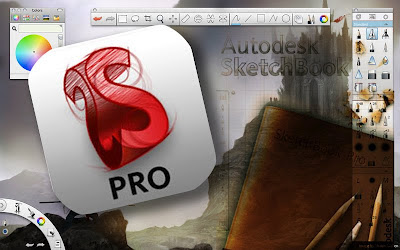 For the most part, I've been starting drawings in Sketchbook and then moving to photoshop to finish, but I'm looking forward to doing something entirely in the program. The brush and pen tools are much more natural looking than I've been able to do in Photoshop. I have to say the recent updated version was a paid update but the improvements were not any different from some of the non-paid updates. If you are just getting the software it was a good deal but already having version 5 it was disappointing. If you are going to make people re-buy something, it should have a few things that really improve and change the program, not just fairly minor tweaks.
Posted by Behemoth media at 09:19

Good to know. I have an iPad but rarely use it, partially as I do everything on my desktop. But I hope to be more mobile and drawing programs, at least good ones, seem hard to find. Still need my pencil!

I use my iPad for day to day stuff when i'm not at my computer... I've wanting to use it as a sketchpad, but that hasn't happened so far. With Sketchpad pro, I could though. It's pretty useful and can be transferred to your computer when you are home. The pens for the tablet aren't as good either, me being spoiled by the intuits 5, but you do draw directly on the surface which can make up for that. I wish you could "feel
the paper when when you were drawing on a tablet. that's a big part of drawing for me!