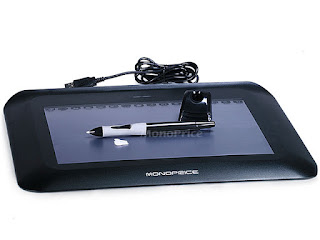 I decided it might be a good idea to have a portable drawing tablet to take with me and use with my 13" MacBook Pro. The obvious choose was one of the Bamboo Wacom tablets. They are small, elegant and I already have an Intous 5 for the tower which I  use all the time. The price of Wacom tablets is fairly high so I looked into alternatives after a friend turned me on to some other brands to check out. In the end I decided to take a chance on the Monoprice tablet.

It took a little,while to arrive but at less than half the price of a bamboo, it's more than equal to one in most respects. It's slightly larger than my laptop and the screen is almost a one to one ratio with the MacBook Pro screen. It is light but sturdy and easily fits in the bag with the computer. The pen is larger than a Wacom pen and needs a battery but, unlike some reviews on amazon.ca, I didn't really notice a comfort difference. Then sensitivity of the drawing surface is the same as a Bamboo, but half that of the other tablet I use. Even so, the differences were subtle and I think what you might lack in fine detail control can be made up just by working slightly larger.  There is period of adapting to the less sensitive pen while drawing but it's workable.

The device has a line of preset and programmable buttons on the top of the drawing surface, which is quite useful but it lacks a wheel control for rotating the canvas while drawing like the larger Wacom does. This is sorely missed but not a deal killer. All in all, the small discomforts I had using it were more a result of drawing on the laptop, not the tablet itself. I actually,like the feel of the pen on the tablet more than the Wacom and this tablet lets you slide paper under the plastic for easy tracing if you need to do that.

I'd say for the money, this easily beats out Wacom for a portable drawing choice.

Below:
My first test image made with sketchbook, some photoshop but all on the new tablet and with the laptop. 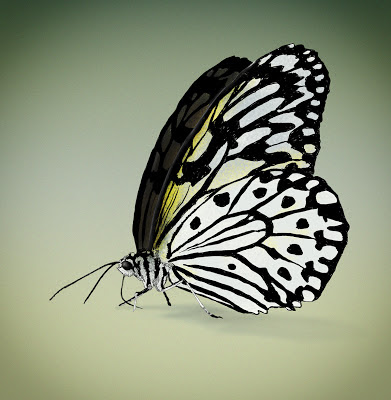 Cool! Good for you on learning a new tool. A friend of mine locally got one of those and is learning to draw with it using his MacBook, too. It's fun reviewing these things and letting others know their good and bad sides, isn't it? The Yiynova is proving useful in ways I wasn't expecting. When I get time to actually PAINT with it, I think it's at its best. Keep us up to date on this. Neat butterfly image, too!

Is your Yiynova a screen you paint on? I haven't tried that yet. I certainly can't afford a Wacom draw on screen in any future I can imagine. I am surprised at how many more people read my reviews than anything else!

I think people read them because they really want to know about these things as they're used 'in the field.' The Yiynova is a screen I can do nearly anything digital on. Look up the Cintiq if you don't know what it is. It's like that but cheaper. :"D

I was't sure if it was a screen version or just the surface… 400$ here which is really a great price. I'll have to stick with my less fancy one for now though! I know someone i can recommend it to right away. He has been looking to draw directly on a screen but the Cintiq is just 3 months rent or something ridiculous.

It cost me $600 which was a total deal and it works really well. Maybe he'll let you try his out!

it was listed at 399$ recently on Amazon.ca… if it's the same model. I might not be. 600$ is still great price and I doubt I'd go the Wacom route for that at this point… just too much money and I'm happy enough with what i've got for now.