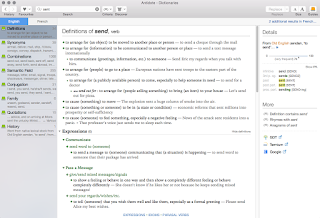 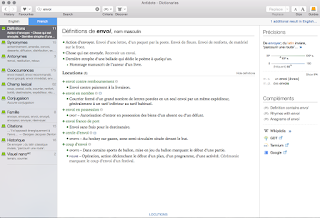 Druid software has released a new version of Antidote, their already great text correction software with the one feature I thought it was lacking. Since I write in French and English over the course of any given day, I have been using Antidote for most of my correction needs. It not only fixes misspellings but tense disagreements and gives you synonyms, examples of usage and a million other things in French.  The new version does all that but now has added and English module that does all for English now too! Plus it does both languages in the same email/document so if I need to write sing both languages, they can both get corrections.

This is not a translation program, it is a writing aid, helping you t not just fix mistakes but help in the writing process. It also doesn't auto-correct which I think we can all agree is worse than Hitler. I am fairly dyslexic so I don't see the substituted words as the wrong once often and then I have to explain and re-write and re-send the message filled with statements more nonsensical than my dyslexia could ever come up with. This opens a sport window and lets you decide not only if the correction actually is one but explains why it chose to flag what you wrote.

So I had been waiting for an English version of Antidote for years and finally, it's not only here but rolled into the software I use all time !The only issue is it won't update my Safari browser plugging my iMac right now and the best thing aside from the English addition is I was finally able to install it also on my laptop despite the version on it was not the same serial number as the iMac version. For a while I had to buy a separate licence to get it on both which is expensive and annoying but that is thankfully in the past.
Posted by Behemoth media at 11:11 No comments: