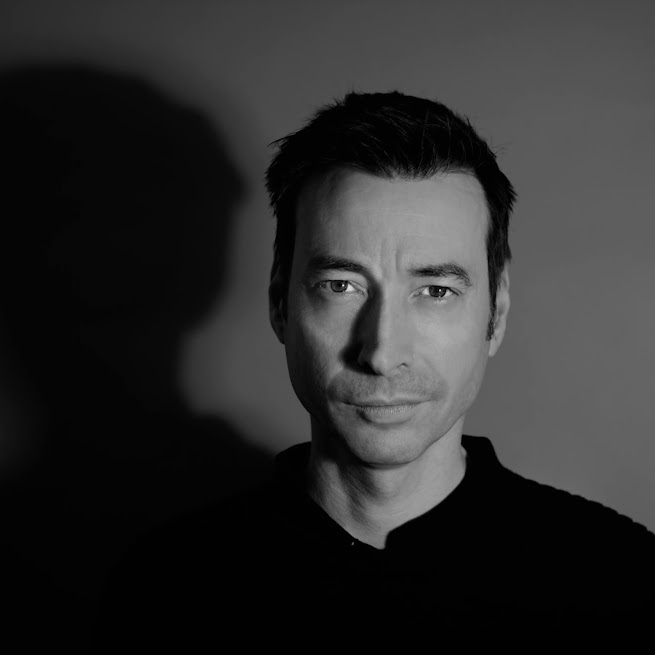 I haven't done a real studio portrait in a very long time and I miss doing them. They used to pay for the studio I had in Boston especially as people needed nice photos for profiles online. I can get a decent set up here in my home studio, it's limited in size but I can make it work. I would like to dump my old lighting setup for LED which will cost me about 500$ but it might be worth it in the long run.

The photo is mon conjoint Robin and he wanted some portrait for his Face Book profile so he asked me. Of course he hated every single one when I went through the RAW files to see how they looked. After processing the RAW images in Affinity Photo and the using it to retouch them and make them black and white he finally saw the light and seems to really love them. It is strange how my digital work isn't all that far off from my old medium format work. I spent hours in the darkroom to get the most out of the negative and I spend hours getting themes of the RAW file. It is still a lot of work sometimes to get a decent looking portrait, especially since very few people really have a good idea what they look like.

I used the NIK plugin silver effete pro to start me off with the black and white conversion but I didn't use DXO photo Lab on these, that seems more suited to landscapes, but that's just my ignorance with the software coming through, I think. 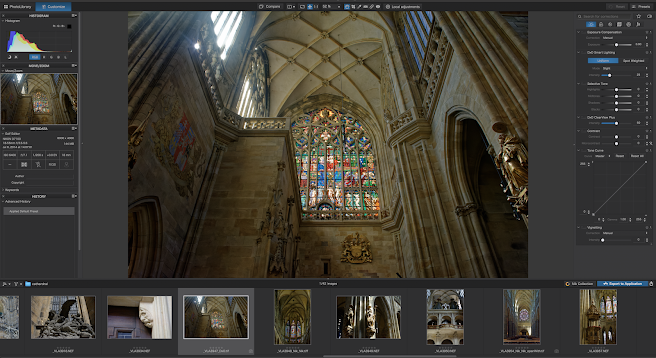 I recently decided to update my NIK collection of plugins to V3 to keep them up to date with my system and also I noticed the installer I had for version 2.5 didn't work anymore with Big Sur the new Mac OS. The update was on sale and also on sale was an update for DXO Photolab, an app I got for free when I last updated the Nik suite. I hadn't really used it much but I did find a few things about it impressive, mostly the noise reductions, but I never ended up making it part of my photo workflow.

Photolab 4 is a pretty big update. The interface was overhauled for the better and the addition of new features like batch re-naming and tight integration with the Nik plugins made me want to give it a second try and I'm glad I did. I have been looking for anAdobe Bridge replacement for years and this is pretty close to what I want, though it does have limitations I'm still not happy with. It only"sees" RAW, JPG and TIFF files as they are the only formats it can edit. I can see why, but it would be much more useful if it could expand a bit into other formats. I do like that it doesn't make copies of your when you open a p=file but instead gives access to your folders on your hard drive which I have organized in a way I really find the best for me. They added a new, improved de-noiser and I have to say - it is impressive. Sometimes a de-noiser will leave the cage looking smudged or blurring but this actually brings back details and colours. It's amazing. You can open the NIK plugins directly from the workspace, though doing that will create a tiff file for them to work from, so you need to start your work in Photolab and then move on to the plugins to get a finished product. 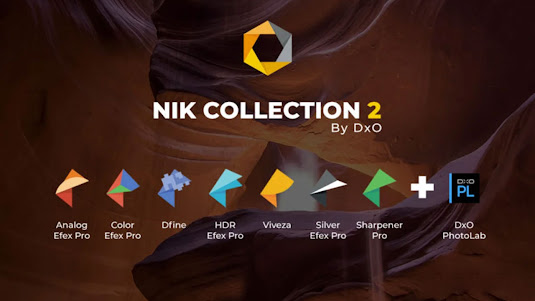 Speaking of the plugins... if you already have them and they work you don't need to update. Nothing much has changed except some new presets and one new plugin that does a great job of fixing perspective issues caused by the lens and the angles you might have shot from.  It's really useful but doesn't work inside Affinity Photo like the others do. The plugins have had additional integration into Photoshop and work great there including "Perspective Effects". Luckily each plugin can also be opened as a stand alone program or inside Photolab. They sell another program for Photolab that is pretty much exactly "Perspective Effects" under another name except it might work on files other than tiffs. I don't know as I wasn't about to shell out more money just to find out. If you have the NIK suite, you don't need it. I would still say if you don't have them, get them. They haven't been updated much but they did not need to be. The way you make selections is still quite unique and really makes adjustments that look natural in a photo. I mostly use HDR Pro, Colour Efex pro, Viveza and Silver Efex Pro but occasionally will use Dfine. If I ever need to make sketching look like an old film camera, Analog Efex is really good for that but it's not something I do all that often. Fun to have, though.

So I recommend both products from DXO with the caveat that NIK Plugins 3 isn't a great deal if you have 2.5 already. 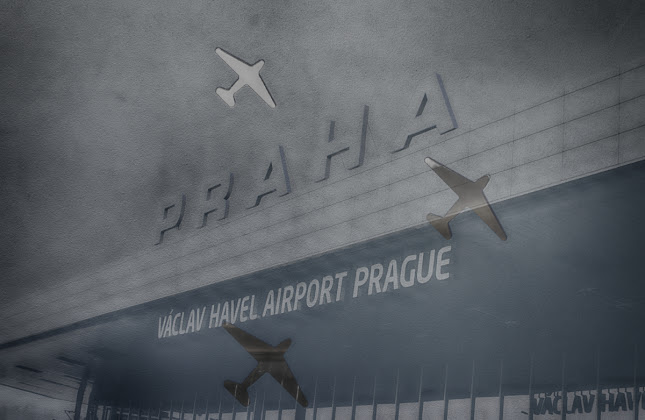 I recently, like yesterday, updated my NIK plugins and DXO studio Lab so my apps would all be up to date for 2021 and played with the integration of HDR pro with Photolab by merging 2 random photos in HDR as a test and I really liked the results. I also really liked Photolab 4, more on that as I learn it better.

I always knew you could get interesting results by combining different images that you might not otherwise in HDR but this has me thinking i should at some point plan out images I think might make a good combo and see where that goes,

Merge is above and the 2 images merged are below. 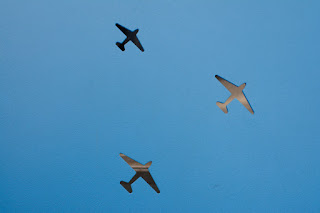 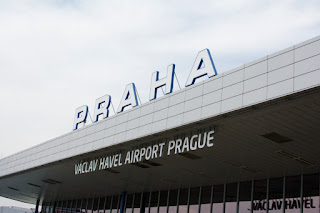 Posted by Behemoth media at 05:06 No comments: 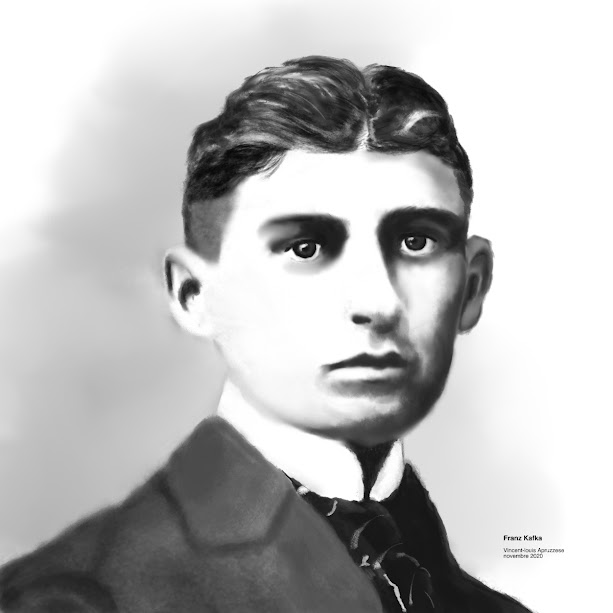 Krita recently added a charcoal brush set to it's tools and I decided to go way out of my comfort zone and do an entire portrait with them and smudging tools. This took about 6 hours to do which is not long for me. I have been encouraged to "loosen up"  by a couple people and this time they were referring to my drawings and paintings. I am not sure if this qualifies as loose.... it was loose for me at least.

I do have a think for Kafka, I even travelled to Prague to see his museum. there are not many photos of him and I chose a younger version of him as  reference. I sort of wanted to show him more as a young man and not a great writer of disturbing stories.

I a not not sure I really got a good likeness. I wanted to change his expression from the stagnant, dour one to something more engaging to the viewer. Nothing extreme just a shift in focus. I played with the lighting too. I tried not to be too obsessed with the hair as I tend to want to draw each one in ink and pencil.

The charcoals were hard to control which helped keep me from my habit of going into super small details.

I have included the original photo for comparison, not that my sketch lives up to such scrutiny. 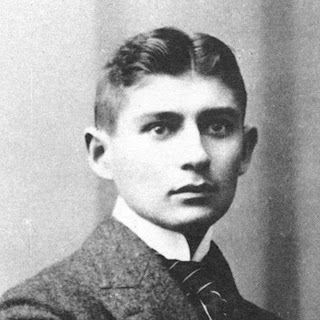 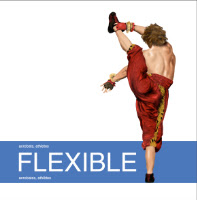 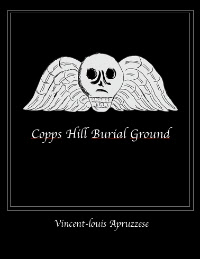