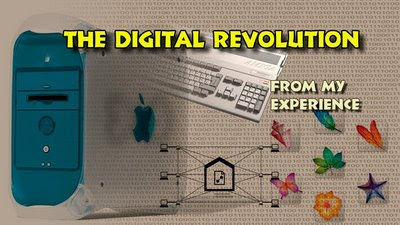 The internet went in spurts and starts... it’s hard to believe now that there were no search engines at one point and you literally found things by typing in http://wwww-fill in word here_.com to see if anything was there. People got noticed solely by linking with other sites... electronic word of mouth. When I put an image on my website.. people were amazed it could be done. Animated gif.. so tacky and low tech now were the hight of animation online. As things progressed I learned Dreamweaver and Flash and was making interactive sites. With all this being ahead of the game I should have made a bundle during those years when if you knew the word “internet” you were an expert and got a 6 figure job somewhere. Sadly one of my best friends (as well as 100’s of others I knew) became ill at this time and I spent my energy on him and them. Basically I missed the boat. In the long run, taking care of a sick friend is worth a life of poverty afterwards if you think you made a little difference... and I do. (Anyone have any work out there in this economic mess?)

I had to give up the Amiga during this time also... it just wasn’t going to last and I needed something I could get work on. I tried the PC on and off... but like most creative people, the Apple was the machine of choice. I have been a little disappointed in the Windows world... all those resources and they just don’t make a system I can relate to. Plus, face it, over the last 10 years Apple has produced some pretty amazing and beautiful machines. What else could artists/designers ask for? I still think the PC world has some advantages of MAC in some areas but not many these days. I say use what works for you... most things are totally interchangeable these days... why fight about apples and oranges?

After settling on a computer I liked, I came into the 21st century with all new tools. In many mays the new tech changed my life completely and in other ways, brought me back to my roots and true passions.