A few of my favourite things....Cinema 4D 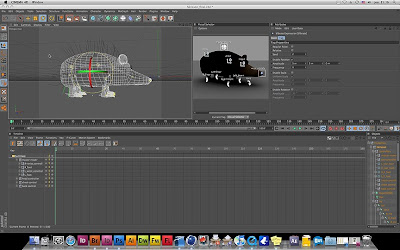 As I’ve been getting deeper into the new C4D update I’ve noticed some features, new and old that I really like. A favourite function is a fleeting thing and depends on the type of work you are doing however so I imagine I’ll come back to again in a few months with a completely different list.

1) Layered animation tracks. My goodness this is something animators dream of. There is room for improvement but it’s really a time saver and make complex animations go far easier than ever before. In short, you set a layer called “Legs” for example and then you make all the leg animations on that layer. You can the make another for “arm” etc. When you are done you can view just a timeline of the legs, tweak them and not effect the other parts of the animation. You can also make them extreme and then lower the percentage they are used to soften them.. all on the fly. This gives you the change to make unlimited walk cycles for example from a basic one without having to re-animate the puppet.
2) Motion layer tracks. This is almost the same thing but contain entire animation sequences such as a walk, run or jump that can be loops (well when the they fix the looping bug they can) and combine and mix them by percentage also.. giving unlimited possibilities without having to re-animate. This feature would be great if you had to make a weekly animated TV show, for example. All you would need to do is make all the basic actions for each character and then mix and match the motion layers to get pretty much most of what you need for very little effort. It could save months of production time. For single person studios like mine, it allows flexibility I normally wouldn’t get as the lone animator.
3) The Visual Selector. Was I ever wrong about this one. I had no interest at all at first as it seemed a silly gimmick. As it turns out, it is now the only way I’d control a character. Simply take an image of the object you want animated... you can combine images in photoshop if you like and then drag and drop controllers in the spot you want. You can also set the primary tool used, rotation for a the head controller is one example. Setting it up takes time but it is well worth the effort. One buggy thing is once something is there, it seems impossible to remove it. A simple delete either in the image selector or in the hotspot panel doesn’t seem to do it! So if you really don’t wan tit anymore, you have to redo the whole thing. That will be addressed soon enough I suspect, but as a time saving tool, this is really indispensable. I can also have more than one for each puppet so a very complex puppet can be broken down into easier, smaller sections of controls.

More to come on this subject involving Photoshop and others!
Posted by Behemoth media at 11:56

Glad to hear you are enjoying C4D!

Always have... I used a few others before (mostly lightwave) and never got very far until I found C4D