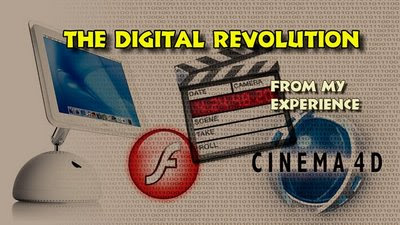 After the internet started taking hold of things a lot changed and not just with online software. For years I had made short films, mostly in Super 8 and aided in some 16 mm films as well. I really loved film making and effects work but it was simply too far out of my budget to even consider it anymore. I actually cried the day I sold my Bell and Howell Super 8 camera (I loved the thing!). Then on day Apple introduced, free with the OS, Imovie and I digitized my old films and re-edited them. God bless my ex-boyfriend at the time. He saw how excited I was to work on film again and spent all his money to get me a video camera that holiday season. I made a couple of documentaries, one about him and another on my grandmother (Big MA). I won an award for Big MA, then for other films I made, soon I had a small showing at a movie house in Provincetown and eventually 2 of my films were shown on Canadian TV. Of course, everyone reading this thinks I must be filthy rich... everyone who gets in the movies is rich.. non? No at all... to this date my most expensive film cost about 200$ and TV never paid me a dime, the movie house netted a pretty sum of 176.52$ I believe. That “you much be rich” attitude really burns me at times. Every artist gets it... “you paint so well you should sell them and make a fortune!” What world do these people live in? Where will this money come from exactly? Most of the time the people saying it have never bought an original piece of art in their lives, like about 95% of any given population. Artistic urges are like a mental illness, you need to do it or you can’t cope. Satisfying as it is for an artist to make art, it mostly goes unseen and unnoticed and certainly, unpaid for by anyone but the artist him or herself.

I did get attention form some friend who encouraged me who were in the production biz. One gave me software to help me out.. Final Cut Pro, Cinema 4D etc. The other gave me some advice, training and eventually work doing de-rigging (a tedious chore I actually love to do). At the same time, I convinced several clients to go online with their work flow which let me work easily from my studio on several things at once and not having to wait for FedEX to deliver crucial information and files. It was all looking very rosy for a while. I always seem to be 1 or 2 steady clients away from a livable income however... even now. I’ve done some very top notch work, but always just not enough to get the steady contracts. I suspect I am in the majority of contractors in this respect.

Animation is another hobby of mine I am slowly able to explore in ways I never could have before. I’ve surprised myself with several animation awards when, truth be told, I had no idea what Iw as doing when I made those films. The MAC continues to be my machine of choice, I’d really like the new 8 core tower to improve my speed and render times but that seems a little like a dream world right now.

In many ways, I am living my dreams... the stuff I can do with my photography and film work was unthinkable a short time ago. My level of experience in Photoshop, Final Cut, After Effects etc are expert and I can only hope eventually, after this self made financial world crisis is over, those skills will be in demand again and the economy of hiring someone like me online will appeal to more and more tech savvy employers.

All in all, the future, though tough right now, still will offer opportunities I can’t even imagine right now. The digital revolution, in which I was swept up in, has changed how I communicate, work and do my art. Even a “nobody” like me in this new world (I am no Steve Jobbs or Bill gates obviously) benefits.
Posted by Behemoth media at 10:38