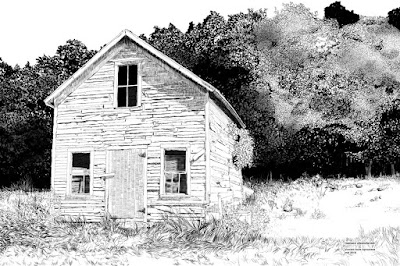 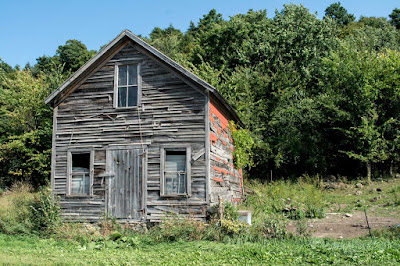 The images can be enlarged by clicking on them and this place was something I saw along my bike trip to Colchester Vermont last fall.
Posted by Behemoth media at 16:02

Editing is a huge part of drawing. It's the part that no one ever sees and non-artists don't generally understand. I find natural textures like this really hard to deal with, too and rarely come up with as good solutions as you do. Well done! It's a tough balance and I applaud your determination in getting it done. It also shows the depth of thought on how you choose to depict things when you show the ref photo. I like the explanation, too. Coolness!

I didn't mention how much work I put into the photo. I sort of forgot about that part. I crop and, highlight and sometimes will combine more than one to get the composition I want for the drawing settled before I start. I will even make 3D elements if I think it's warranted to fill out the look I want. Those images look a mess as photos but mostly come together in the illustration.

If i am stuck on the natural textures I take out that book we discussed a long while back, Drawing in Pen and Ink. It's really my bible for this sort of thing!