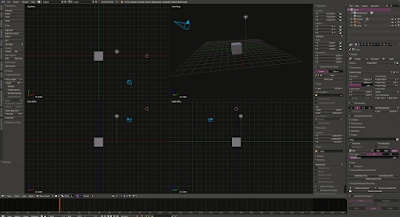 As the price of Cinema 4D has jumped astronomically over the years with less and less improvements and new features to pay for that extra cost, it has become apparent that unless I get a hell of lot more work that pays a hell of a lot more money, eventually my current version will run out of steam and be unusable. Already, I am trying to adapt to the untimely death of Cactus Dan whose plugins are essential to rigging in C4D (In my opinion) and are no longer being updated.


To start finding alternatives, I decided to learn Blender, a free program that has been used for some amazing animations and has ALL the features and more of C4D and frankly just about any other software out there. Of course being free software it has its pluses and minuses , a big minus being not many places use it professionally.

Blender is a very deep program to learn. I decided to start very simply as I had tried to learn it unsuccessfully  in the past. Despite having used a number of software over the last few decades, I couldn’t even place a cube into the scene or render anything. It was frustrating and I have to say, it still is. The interface is pretty terrible from an end user’s point of view. Like much of the freeware out there made by programmers, it is set up more to a programmer’s set of needs. Blender requires that you learn a huge amount of keyboard shortcuts in conjunction with a 3 button mouse just to navigate in it’s windows. Many of the shortcuts are non standard so it can be like learning a new language just to do the most basic of tasks. It’s a well known issue in the Blender community and there is an ongoing debate from what I read on various forums on what to do, if anything, about that problem. It IS a problem, despite the alleged benefits of typing in values by hand for some people, it simply isn’t how we work these days and limits drastically the reach of this fairly amazing effort. Many of the arguments for keeping as it is are reminiscent of those when computer went from DOS commands to a graphic interface and I would argue that argument was lost a long time ago.

To get over this hurdle, I bought a 600 page book The Complete Guide to Blender Graphics (3rd addition) by John M. Blain. I don’t find the writing style so easy to understand but it covers seemingly everything and should be a great reference source as I go on. Another thing I did was follow tutorials, a few about the basic interface which were somewhat helpful and a few at www.LittleWebHut.com which I am using as my work samples here because of the simplicity of the projects and the instructor never assumes you will remember the complex series of shortcuts and goes over each progression step by step which helps me to slowly memorize and adapt to the interface while creating something interesting. I picked two basic modelling projects, an animation that involved particles the node based cycles render engine and one that creates a robot dog and introduced me to the key frame and timeline system in Blender.

My Impressions So far

Having only scratched the surface, many of my opinions will surely change over time. I plan to keep at this another 3 months intensely, hopefully ending in doing a complete short animation in Blender from start to finish.

The modelling tools are interesting and while not intuitive, cover all the bases and have some interesting ideas behind them. You have to accept each change before moving on to to the next - this is pretty annoying and slow. The bones IK/FK system is clunky and something like setting up an IK chain (so far, there are certainly plenty of functions I have not been exposed to yet) is manually accomplished bone by bone while it’s a simple click in C4D and other programs. The particle system is pretty good from what I’ve experienced. Not as good as X-particles (which is an unfair comparison) but I found using them fairly easy. Rendering is a little complicated. The Blender engine is only barely serviceable and might be good as a test render while the Cycles engine is nodes based and manages to give flicker free animations using techniques that take longer and are not as usefully implemented as they could be. You have a lot less control in Blender in the final render from what I see and a lot more control in setting up the textures. The key framing is not great sorry to say. It’s hard to get a handle on and I found myself swearing quite a bit just moving a sphere from on spot to another. 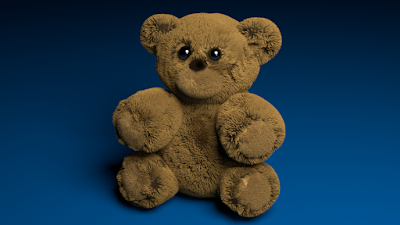 Things I need to Learn for this to be Practical

Compositing is a large part of my work flow, not just 3D into live action video but often separating  things like motion blur and depth of field to be adjusted in another program like After Effects or Motion to gain better control and save on rendering time. The capacity is here, I just have to learn how and if I can save different layers (like a shadow, z depth, motion vector or object layer) as separate files on export. Mograph-like clones and animation are the bread and butter of many 3D artists and Blender is lacking in this department but they update with new features regularly so who knows how long it will stay behind in this aspect. Blender has some pretty awesome character rigging tools, if you can learn to use them. I think I will gain some very much needed experience in more advanced rigging techniques as I go along.

Being free is one, but not the most important as functionality and ease of use trumps free while doing serious work. Time is money and also the less aggravating something is to use, the more you will use it. Blender’s add-ons are nothing short of amazing and super useful. They provide easier and faster ways to do things you would pay tons of cash for on another platform and many are freely included. Some examples are an auto-rigger, a room builder and even a very adaptive character builder, something all high end 3D software should have as making characters is the biggest time killer and often the most discouraging aspect of 3D work fro many animators. I wish there was a clothing generator as well! Those working on this software update it quite often and it’s always improving. They seem very transparent and open to suggestions - something Maxon (C4D) has most definitely not been in recent years. While far to many features are hidden and hard to find, they are there and I was surprised to discover many features I paid for in C4D plugins were just sitting below the surface in Blender. It should be stated that overall, it is fairly stable and doesn’t crash often, but it does crash. It can be a little buggy as well. So like all complicated software, save often!

I can’t say I love Blender or that it will come my main software anytime soon. I can say it’s got the potential to become those things. I also find that learning it has already opened possibilities I had not thought of in C4D in terms of workflow and other things but can be applied to it. I can also see using some of the features in Blender as a way to get around or create things that C4D does not offer or do well and importing them.

I have joined a forum for Blender that seems friendly and helpful, something that really pushed me into C4D was the C4d café forum, one of the best ever. I need to get more competent and comfortable with Blender before I post anything and start to interact. I am sure when I do, I will gain better appreciation for this software.
Posted by Behemoth media at 11:03