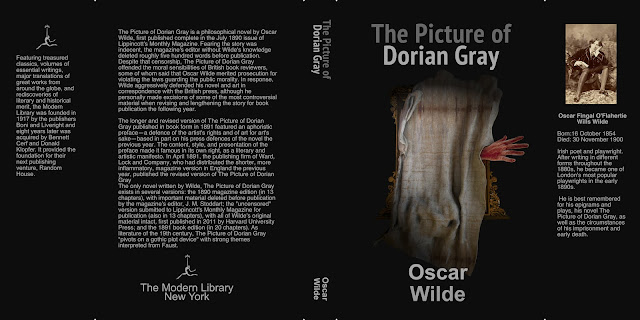 So this one I tied to break away more from my habits and it has a sort of paperback book cover look to me. These past three book were all from the Modern Library, so I need to maybe look into my collection and find another publisher. I have a few Jules Verne and Burroughs Tarzan of the Apes, so there are other subjects to cover (pun intended).

I deliberately didn't use black backdrops on the last few because I think that while visual short-cuts are useful and sometimes needed, it's best to at least try and avoid them or turn them on their heads now and then. Horror is always some ornate font, in red on a black background. Dripping blood abounds on these covers. You might end up using some of all of those visual tropes in the end, but it's always useful to take another road first.

The Picture of Dorian Gray is very different from the typical gothic horror story, much more psychological and while there are violent turns, there is also a lot of humour. The monster is our own ego and pretentiousness revealed in the character (and portrait0 of the eternally young Dorian Gray.

The illustration is a 3D render I made to look less 3D prices and more painterly. A skin-less looking hand is pushing it's way out of a paining in an ornate frame that has been covered by an old sheet. I made one image that didn't show enough of the frame which made the image a too ambiguous so I made another. The font is simple and clean. None of the text is pure white, I find it easier to read if the text on black is a light grey over pure white.
Posted by Behemoth media at 13:28