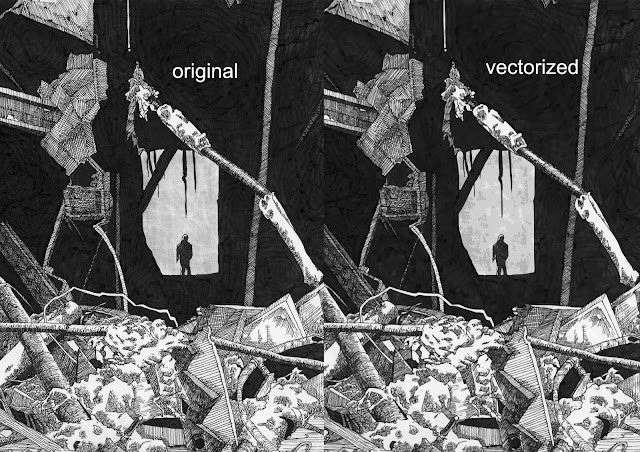 Mike Luce did a test over at his blog with Super vectorizer 2 which I already but only used in a limited way. So I took a really old, super detailed drawing to see how it did turning bitmapped to vector.

As would be expected, the dot and line work looks pretty damn good. It did take some playing around to get there though. The doorway greyscale was done with grey chalk in original and the tones are a little too subtle to be vectorized, but still, not a bad look.

Affinity Designer does not vectorize bitmaps like Illustrator does (barely) so if you need an external program for that Super vectorizer is a good choice and very well priced.
Posted by Behemoth media at 08:28

Dang, I think this is an even better test than doing lots of colors. It did a great job! This would still make good prints, and allow older work another lease on life by getting something done on giclee printers and good paper. Awesome!

The ink stuff works really well with some adjustments. It seems to have many of the same issues with tonal details that reprography, and old ancient way of transferring images to plastic prints I used to do.