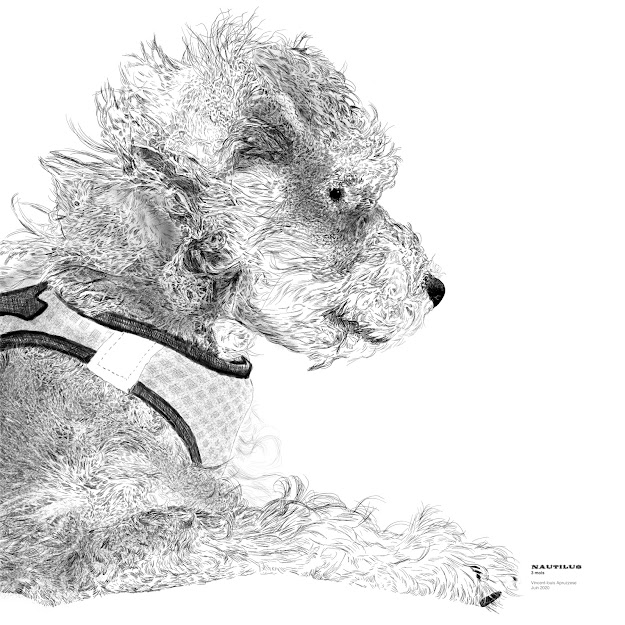 My new puppy, Nautilus - named after the Submarine in Jules Verne's classic novel 20 000 Leagues Under the Sea. This was drawn on the 12.9" 2015 iPad Pro my brother gave after the upgraded to the newer model. I used Sketchbook Pro but Procreate would have done just fine.
The new iPad is pretty amazing in terms of speed, power and screen size/quality. Much better to draw on than the smaller base model I had and just sold. I will saw it's so large as to be ungainly. It's not easy to set on your lap and draw, it is pretty much the same size as my laptop. Next photo trip somewhere it will be amazing to have. Normally I have to bring the iPad to get around with and my laptop to process and store the photos taken. I can do all the photo stuff on this and just take my iPod touch with me walking around which will be a lot easier. I can also just sit and draw something when I'm away easily and in great detail as I think this image shows if you click on it to see it larger... I didn't skimp on details.
It will take a while to get used to the new device... and the rotten pest who is eating something he shouldn't at the moment.
Posted by Behemoth media at 16:52

It's the new boy! Lovely drawing, Vince! Lots of nice juicy details! Glad you're getting used to the 12.9. I will say that the newer model is smaller and easier to hold onto but the bigger screen in general is just nice as hell to draw on. I hope you keep having fun with it. The iPad has become invaluable to me. Well done and I look forward to more art from it to come. Now all you have to do is find some nice animation apps for it and you'll be all set!

Thanks Mike! I would prefer the smaller model but this was free and I prefer that most of all! I will try another in Procreate soon and I would like to try a colour drawing as well, maybe an acrobat and see how that works out. I am excited to try some real photo editing in it. I used Affinity photo in Barcelona and it was OK, but really slow and limited on the basic iPad, this should be like having a laptop with me.