Technology has made my job and millions of others, possible. It’s become a trap for many who live off contract work like me.

One thing we have the advantage over a big company for example, is we can usually crank out projects in record time. A big department of designers/artists will almost always be slower as there are a lot more people to satisfy. As a contractor you usually only need to satisfy the clients you dealing with. The other advantage is also the trap. The technology we use to get it done so fast.

Many bigger companies wait until 3 versions and many years have past before they finally shell out a huge amount to upgrade their software or hardware, all at once. Contractors depend on those upgrades to keep ahead of the competition. More efficient software and hardware saves time and for an hourly contractor, time is literally money. So, oddly, the people with the least money buy the most expensive stuff to stay competitive while the big boys who can well afford regular upgrades do it in big chunks and are always years behind what can be done technically. Of course some places keep up to date but that’s not exactly common. On any project I work on alone, the client gets very up to date features and functions older versions didn’t have while almost every time I work with an established partner business, I have to hope I have an old version to re-install (or in some cases I have buy the old one again) and try to make up for the lack of functionality I’ve come to expect for the last 2 or 3 years. Yet they land the big and more important, stable clients. Seems unfair, and it is, but that’s the world we live in.

So if we don’t keep up, we lose our edge and if we do.. we stay poor. I often wonder if suddenly, Behemoth became one of those huge companies with 100’s of artists working for it... would I still insist on staying so up to date and would that be avoiding one trap, for another? And as tech loving geeks.. do we want to escape in the first place?
Posted by Behemoth media at 20:08 No comments: 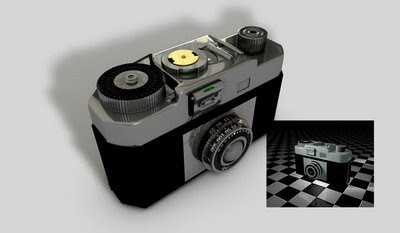 I made this model of a camera I owned at the time in version 9 of Cinema 4D and rendered it a variety of ways. Global Illumination was called something else then... I forget what as was ambient occlusion, but either was a little out of my processor range. As it was It took 20-40 minutes to render a single image.

With version 11 and my new computer set-up, this was a still along render (10 minutes). But, to be fair, I used all bells and whistles and really see a big difference. No matter what I did with lighting before, the camera always seems to be “floating” above the surface. No such problem with my current settings. I almost put back in the 80’s 3D render standard... the black and white checker board floor but it was just too embarrassing.

This model is quite complicated, I really tried to get in as much real detail as possible. With the new lighting and render engine, that detail pays off in very real looking image.. in my opinion!
Posted by Behemoth media at 11:51 No comments: 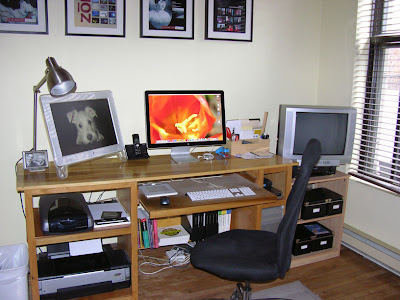 As my old dual G-5 was not cutting it anymore, I needed to upgrade my tower sooner than later. I keep hearing how expensive these new towers are, but honestly, I paid double for the G-5 than I paid for this dual quad core with 6 gigs of ram and a much better graphic card, not to mention the new LED screen which blows the old one out of the water. It seems a great deal from my perspective! Could I afford it in this bad job market...no. But I could afford less to be without a tower if things pick up suddenly. Oddly after setting it up and using it a couple days, I realize it’s basically my dream office now.

For now the old computer is networked into the new, giving me the extra rendering power for larger projects in Cinema 4D. The transition went better than expected with the computers doing basically all the work transferring all the software automatically. There were a few glitches, like re-installing adobe media encoder and now I must run Photoshop in Rosetta mode if I want to integrate the scanner. Apparently the twain driver only works in the PPC version of Photoshop. The largest software issue is my French grammar and correction program, “Antidote”. Every time I get a new computer, I seem to need to buy a new copy as there is no way to de-activate the old to re-install on the new. That is literally the only thing I can’t recommend about that software, however. It might be one of the best done programs I’ve ever used. They update frequently for integration with just about everything that you type into. Customer service is beyond amazing and even more appealing to me, it’s made locally.

The computer:
As with most MAC computers, ease of everything is everywhere. Putting in extra hard drives (up to 4) is even easier than before. You could literally eat off the inside of one of these machines. I’ve never seen the inside of something so organized and just plain clean looking. It has space for two burners, I opted for the one for price reasons, but it would be nice to get another as I am often caught needing a back up disk while I am burning a DVD or 10 for a client. The speed is amazing. Much better than I hoped. My last animation was a 2-3 minute per image render job. On this it was 20 seconds (!) and I experienced none of the screen refresh problems that have plagued me since I started learning character animation. The new graphics card showed it’s worth within minutes of opening my favourite software.

The monitor:
I have now two monitors... something I have quickly become accustomed to. The new Apple LED 24” is a big improvement from what I had, which was a pretty great monitor itself. I love having a microphone, video cam and speakers in the monitor (the sound is not half bad btw), something Apple should have been doing for years to make up for the prices they charge for these things.

Disappointments:
Not everything is perfect. It seems ridiculous that new machine has a ton of ports and not one of them is a standard firewire! Hello, Apple! This is a Pro machine, non? We are not all going to run out and replace every video deck, camera and the rest on top of paying a minimum of 5000$ for a new computer! I was able to daisy chain a firewire hub from my Lacie external disk drive, but I really should not have to do that for a basic functionality.

The other big disappointment was the service at the Apple store. There must have been 100 service people and it took 40 minutes just to get one over to us and the first two that tried seemed to know nothing about computers or disappeared, never to be seen again. I know Ipods and Iphones are popular, but you might think giving service to a customer who knew exactly what he wanted and was willing to shell out a few thousand on the spot might be a higher priority.
Posted by Behemoth media at 16:34 3 comments: 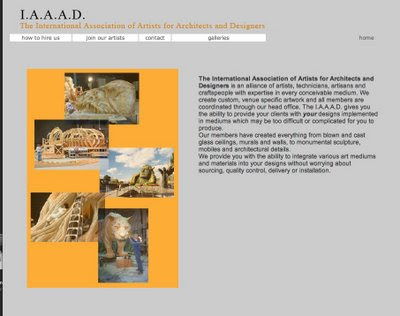 The International Association of Artists for Architects and Designers web site is now online for evaluation. Be sure to contact the director, David Levine through the site if you have any projects you would like them to do for you.