AppleWorks was Apple's long standing suite of programs used as an alternative to the Microsoft office suite. Office has and continues to have an on again off again relationship with the Mac so it made sense for Apple to have its own simplified version as a back up. It was quite capable and easy to use but one aspect of its interface might just make a comeback in light of recent developments in how software is being sold.

While Office has always been sold in a suite, adobe products have pretty much been separate products, but have more and more been grouped into suites until now you really have little choice but to get them all. Macintosh ended the AppleWorks suite years ago but just started giving away it's new suite of products for free with new computers, much like AppleWorks was.

The interface element whose time has come back might be the idea that instead of opening each software when you need it, you open the suite all at once and choose which function (word processing, spreadsheet, etc.) from a main menu. This way of using a suite has a few advantages. Shared resources and functions are not repeated in each program making updating easier and downloads smaller and faster. Another big plus would be that once someone is using  one part of a suite they are more likely to use the rest and with all the other functions one click away in the same software, it's much less likely the user will switch to a competitor's product.

Only time will tell if this old interface idea will resurface but it makes sense given the direction things are going. I know personally, I'd still be using AppleWorks if it were possible and the all in one place set up is part of the reason why.
Posted by Behemoth media at 19:50 2 comments: 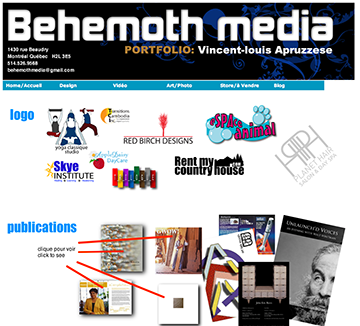 This page (as you may have noticed) is updated with a new look. The Portfolio has a similar update, is rearranged and added a new demo-reel and a page for stuff on sale. Should be less complicated to fond things and the video page is less overwhelming and all on one page instead of in a clickable html database.
Posted by Behemoth media at 17:50 No comments:

What I won't be buying anytime soon

Instead of reviewing things I have, I thought it might be interesting to mention things I not going to have anytime soon and some of the reasons for that.
The new Mac Pro
Adobe creative cloud
Wacom iPad stylus
Cinema 4d version 15
A new iPod (or any smart phone)

Posted by Behemoth media at 16:57 No comments: