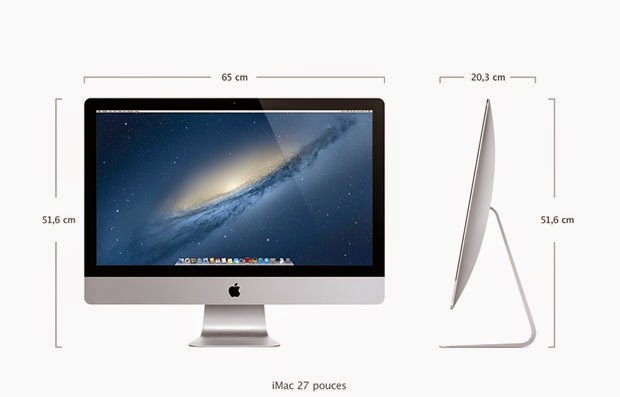 It’s been no secret my 2009 tower is getting long in the tooth and it was time to update my main computer. The new mac Pro towers are very fast and cool looking but also expensive and a little beyond what I can reasonably use in my home studio so I decided on a new iMac. For a lot less money, I got all the upgrades I needed (the best graphics card, 32 gigs of RAM etc) and didn’t need to go Thunderbolt drives for storage. Someday maybe.

The machine itself is really nice and I mean REALLY nice. The screen, though not the new retina, is well above many monitors I see on other computer and sold separately. The thin design is striking and having an all in one is appealing for limited desk space, especially since I use my older LED monitor as a second for my work.

It is fairly quiet, but not silent. I do a lot of 3D rendering these days and the fans certainly come on often enough. It’s not annoying though. The only hiccups are with the new OS.. Yosemite so far. Wacom tablets were not compatible, something that is now fixed, my key chains were a mess and quite a few files didn’t get transferred over from the old computer with the migration tool and had to be done manually.  Having to sign in to every account and many websites that automatically knew my login before and the damn FaceTime would like your password for « …. »  is a huge annoyance when you just want to get going on your new machine. Another problem were the Seagate drives I bought as a place for my files and as back-up. They really don’t like Macs for some reason and needed to be reformatted several times before finally giving in to the fact they were never going to touch a windows machine in their lifetime.

The speed with rendering is fast than my lower but not as fast as I would have liked. The overall user experience is amazing, the he amount a RAM does a lot more than a fast processor in many cases to make things go quicker. The screen real estate is fantastic and working in Cinema 4D went from being  a little difficult when matching animations to video backgrounds to something a lot more precise and agreeable.

I knew there would some compromise going from a tower to an all in one workstation but I didn’t realize how minor they would be in the end.
Posted by Behemoth media at 07:34

I love my iMac. Recently updated to Yosemite and it really hasn't messed with my stuff at all, though there have been some minor "improvements" I haven't liked. The new monitor is pretty amazing, and the faster chip is probably cool for folks that really do a lot of gaming or rendering. RAM is always a good thing. The screen size is great; I have two windows open right now in Safari, one of which is streaming Netflix the other I'm writing you in. Glad you like it. Sorry it was such a hassle to get to you. The Pro IS nice, but really, unless you're Pixar, you don't need one. Congrats!

I love the screen in the imac and I have no regrets about not getting the retina model. This is more than good enough for my needs. I also have my 24 inch LED screen hooked up to next to the imac so I have plenty of screen space. never seem to be enough though! While some of my issues were from the OS, i think most were from the transferring from old to new computer.