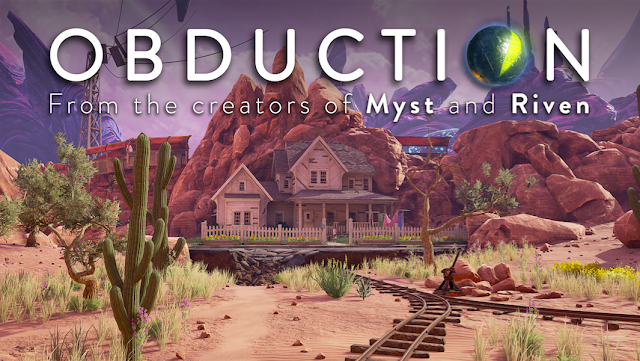 Obduction is a game I have been waiting for years to come out. made by Cyan, the same people who gave us the original Myst games, games I love to this day and replay now and then, I was really looking forward to it and playing a game with no violence and allowed me to explore a place at my own pace.

So the game finally has arrived and it's pretty wonderful. While some people complain about stuttering or bugs I haven't really experienced much of that, or maybe I haven't experienced more of of it than I see with most games I play.

Visually and storewide it doesn't disappoint and was well worth the wait. The renderings and landscapes are breathtaking, artistic and beg to be explored. The interactions with the residents of the world are limited mostly to video clips which is fine, though I know some people wished there would be more character interaction - it's not something I want from a Myst-like game. 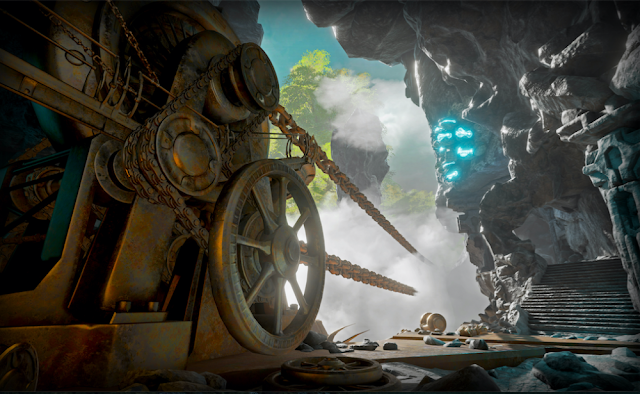 Speaking of Myst-like like. this game does not loo like the games from the series or follow the plot or have any thematic connection to them. It is very much it's own thing and I applaud the makers for that. Where it resembles that previous franchise is in the gameplay and feeling of the environments. Like those past  project, Obduction has many puzzles to solves and nooks and crannies to explore but follows it's own rules and aesthetics.

To be 100% honest, I am reviewing this game without finishing playing it. The reason why is the one thing I find wrong with this new adventure. Some of the puzzles involve math, literally they do and that's not my strong point, but you can find solutions online and hints and get past them easy enough and continue to explore. I have reached one area, the "maze" which embodies the worst tendencies that Cyan games puts into some of it's puzzles. It's pretty much impossible to solve even with cheating, especially if you missed a step. If you do manage to figure it out, it involves so much back tracking and repetitive action that's it is just a total gamer killer in terms of enjoyment.

So I am now re-starting the game from the beginning, following a guide to get past the log-jam of the "maze" so I can actually finish the game. Disappointing to be sure but I would still say on balance it's well worth getting and playing. I am not unhappy with my purchase, just this one part of it that really goes too far in terms of difficulty. I am sure there are those that find this sort of thing the reason to play, but I am just as sure that most of Cyan's fans are more like me, liking the puzzles but loving the exploration more. 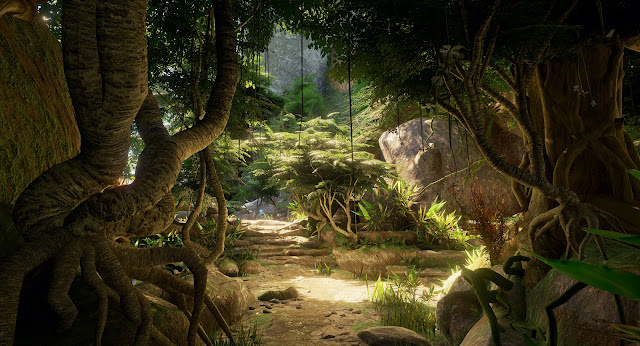 I know there are two endings and I hope they are better than the tow endings of Quern I recently finished, where both basically took you to the same place. I also hope that, like the original Myst, I can walk around and see some thing is might have missed after the game is over.

UPDATE:
I am finally out of the maze! The guide I used wasn't totally clear but I managed to follow it enough to get it set up so the maze would take me to all the locations and i went beyond that, but not to the end of the game - yet. I also discovered in a comment that ALL the bridges can be activated using the the same code which saved a lot of time trying to match each bridge to a different code.
Posted by Behemoth media at 13:19 2 comments:

One of the difficult things with adapting other people’s stories for films is the baggage that comes with some of them. Many times it’s just odd plot machinations or maybe older references modern people have completely forgotten. Sometimes, it's much more delicate.

H.P. Lovecraft was notoriously racist. There isn’t much of a debate about that. He wasn’t pulling an Eminem, saying he was just writing characters who happened to be racists. He was saying Italians are a filthy race living in squalor (as just one example) in stories, correspondences and personal interactions. I would argue it’s much less present in his literary work than his personal life and some of the offensive stuff in his writing might be us putting our modern sensibilities over those of a time where  racism was open and common - but I wouldn't argue it’s not in there or acceptable.

Gothic horror stories and many stories from that period in general, including Lovecraft’s, have an inherent sexism as well. The protagonists are almost always male, and often there are no women at all! When women are present they are often victims, or sickly or at the mercy of some guy she married. To be fair, that was the case for many women at the time so it’s no surprise that’s how they were represented in fiction.

So, why would I choose to make films from such problematic source material? For one thing, the stories themselves are fun, amazing, scary and have attracted me since I first learned to read. They are not about being racist or sexist, they are just trained by those elements. Since the authors are dead and the stories are for the most part in public domain, they are a rich source of ideas a poor filmmaker like me can actually make use of. As time goes by and immortal corporations have begun to own everything for forever and a day, making freely adaptable material more and more rare.

In the case of my Lovecraft films, I easily can cut the stuff I like out. In fact, it never has anything really to do with the basic story so it’s never missed. I am also not lining the pockets of some bigot with cash in order to make them. Despite his influence on the horror genre, he is still relatively unknown in the world at large and, face it my little films won’t change that. His stories are also simple enough at their root to cut down to 2-4 characters and a few settings. This is vitally important when you are a one man show making an animated film by yourself with no budget.

Sexism in gothic horror in general is little harder to get around and I haven’t been able to do what I would like to change them in a way I think would work. I have exchanged some men’s parts for women but then I can’t get a woman voice actor to record the part. The doctor in Cool Air would have been a woman if I could have found someone is one example. I added a mention of a sister in Staley Fleming’s Hallucination just to have the mention of a women, even though in that mention she is the grieving fiancé.

In conclusion, I guess I still have some way to go to combat the problems in the stories of others I am telling. like many things, some of it because of budget, resources etc is beyond my control - but I do try.
Posted by Behemoth media at 11:55 4 comments:

My next project will be Edgar Allen Poe's The Oval Portrait.

I have to make three characters but I might modify one from a Lovecraft animation to save time. No synchronized dialogue in this one but 4 set pieces I will try to make a little less detailed and easier to render. It does take place an a recently abandoned manor afterall. There won't be tons of furniture etc to make. The will be a female in a large dress as  challenge and I might try some more advanced texture painting on the people.

Of course first I have to get the narration recorded and work out more of the details with lighting and mood. So here are a few images of the sets so far. There will be the long shots of the manor (maybe a tower as well), the hallway of paintings, the bedroom that contains the titular oval portrait and the artist's studio in the tower.


Clicking on the images will bring up larger version for anyone interested. 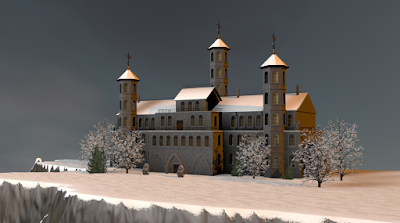 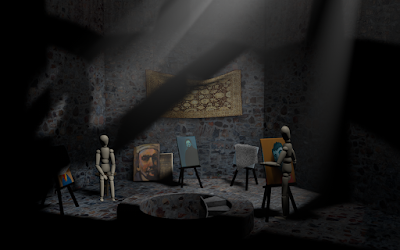 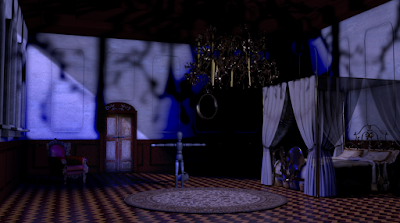 
My adaption of the short Ambrose Bierce story done in Cinema 4d with the voice talent of Mike Luce as the doctor.

Unlike the Lovecraft shorts I've done, this one needed some addition plot points to give the characters motivation and help it work as a short film. The written piece is very short and light on background details. Ambrose Bierce was not on my radar for this series of animation until he was mentioned by my friend Arthur Dion of gallery NAGA in Boston and I might take up another of his stories in future.

I think I continue to refine my animation and rigging techniques with this project. I also delved little more deeply into effects work with the spectral hound and the fireplace details. I also discovered limitations to C4D i wasn't aware of.. like simulated hair doesn't show up in operate passes, like the depth pass, making it difficult to add focusing effects in post.
Posted by Behemoth media at 15:12 2 comments:

I was up for a TV job that I did not get and decided that the cartoon raven is made for it, with a few modifications, would work for an animated version of the poem, The Raven. I reworked the CGI puppet and set up this little test which shows potential. I think.

This won't be done until next year I'm guessing as I am almost done with my Ambrose Bierce animation but have already started work on Poe's The Oval Portrait.

My idea is to have a series of gothic horror shorts that are not all Lovecraft and maybe tell a few more obscure stories in the genre. The Raven is far from obscure but since I seemed to be part of the way there - why not?

In case anyone is interested, here is an image of the original model which is certainly more child friendly. 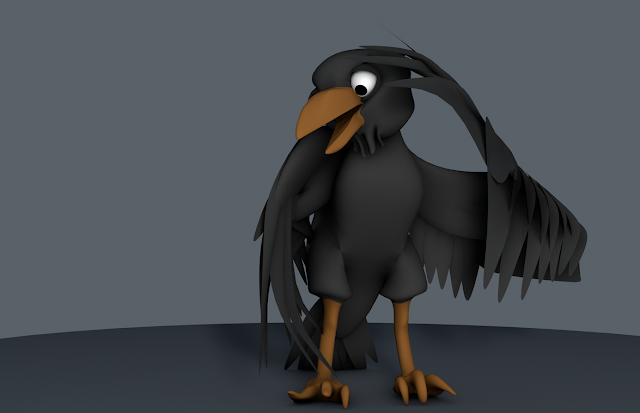