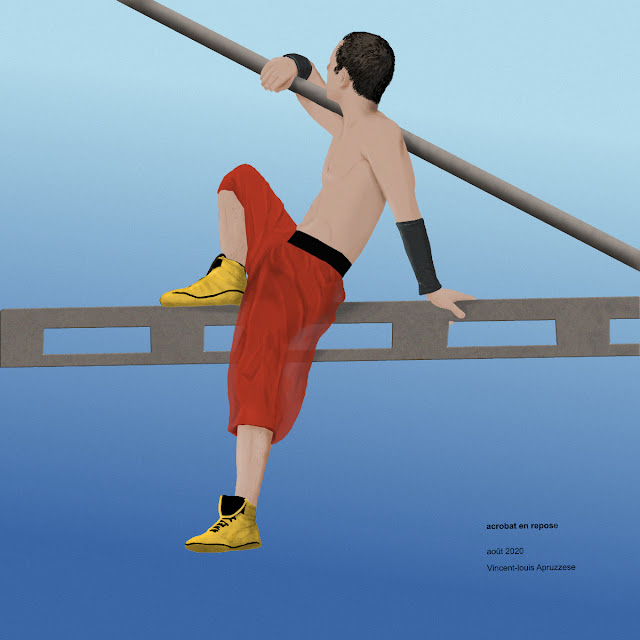 This was all done on the iPad, the first try to do a colour drawing all on the device. It was not all done in one app, however. I started in Procreate but had to move over to Affinity Photo to do the doing and burning of the greyscale sections before colourizing them for the final look. Procreate can't do that. There was a lag with the Apple pencil as I went along, some of that was an Affinity update in the middle of the drawing process and seems to have worked itself out after a day. It gave me a good excuse to get into the very different interface on the iPad version of Photo and I have much better grasp of it now.
This was maybe not the most exciting of my acrobat drawings but  beggars can't be choosers and there were no free shows for me to get new references from this year.
Posted by Behemoth media at 09:50

Neat image! I rarely stay in one app these days. I'm pretty much a Procreate-AD kinda guy. Whatever works, that's what matters. You do seem to have a thing for acrobats. Doing series makes for good shows or just good groups. Keep having fun!

Who doesn't like acrobats? They make seriously great subjects for me. I love the odd positions and the amount of muscle they often show is fun to draw. There remain several acts I'd like to draw but haven't seen in a free show I can take reference photos from yet. Last year I got some interesting shots but the performers were really, really young and I'd rather more experienced looking acrobats. The younger ones lack definition in their bodies I think. I would love to do more yoga positions as well forthe same reasons but I haven't found a model or a way to take references for that yet.