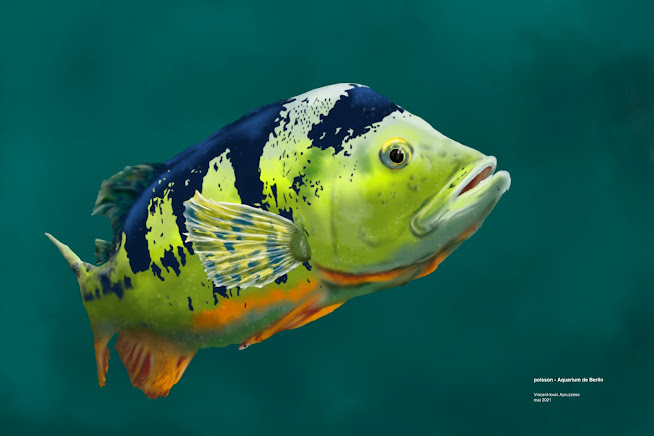 Painted in Krita. I had this in the back of my mind as a something draw or paint for years but never did anything about it until I was on a "purge" of old files recently. It took about 3 days to paint andI think it shows some progress in my painting skills. I put the dark blue/black, the fin and the eye on separate layers so I could block out the main colours on the body and mix them easier. then I added details by slowly building them in on top, mixing them and doing it again until they looked OK. The transparency of the fin was a challenge and the fish eye was more complicated than I thought it would be. I thought about adding floating crap in the water but that looked distracting so I decided to keep it simple.

Very cool! Looks like a lot of work. I don't know if I'd have the patience for this. Might be you could do a series of fish. Some of them have amazing colors. Well done!

The skin of fish is so different form everything else it's a real challenge. I think I am getting better at painting details though it still looks a little "soft" if that make sense. I have reference photos of other fish I could work on. To be honest, I have few reference photos left I am interested in and I have not been able to really go out and experience things to get more in almost 2 years.