Topaz Studios has enjoyed an expanding reputation for well done innovative plugins over the years, often being ahead of the game particularly when it comes to the new Artificial Intelligence plugins.

Photoshop has just added the ability enlarge photos with little to no quality loss, but Topaz has been there for a while. Their Gigapixel AI enlarges up to 6 times the size of the original and, while there are simple and sparse controls, they do allow some options over the final result. You can do photos one by one or drag a bunch into the window and  run a batch of them. From what I have seen, the Photoshop version of this is super fast but with no control. Gigapixel is VERY resource intensive and it's hard to run anything else if it's processing a group of images. The end results are worth it. If you have a client sending you small images that need to somehow be used for print, this will help or if you have smaller files from earlier digital cameras (like I do) you can bring those files into a size that is actually useful in todays world. Most of interpretation done enhances the photo, though now and then you might get a weird interpretation and I found that light colours chest hair on a light skin and get a little chunky looking and needs some finessing to keep it looking natural.

Denoising is now standard is many image editors but Denoiser AI is a step up from most of them, while suffering from the same setbacks that I don't think you can really get around. Some images are just too much for any software, AI or not, to just make up large areas of ambiguous pixels. Overall the images can be greatly improved and if the problem is just grain from lower light but otherwise detailed images it does an amazing job. One thing I found was if you have already demised the image somewhere else, this plugin can't do much more with it. This makes sense as the image has been "smoothed out" so the grain has already been removed so there is little left to read. DXO Photolab has the best denoiser I have seen but it only works on RAW files while Topaz plugins work on any number of formats.

Sharpening is another tool every program has. Usually there are many methods to enhance sharpness. Denoiser AI take the subject into consideration and has setting that allow special attention spent to faces. Of all the plugins this one worked less impressively than the first 2 and getting a good result wasn't as easy or natural looking especially on older black & white photos where eyes can merge into black blobs. It did bring some focus back to out of focus images (within reason) that other techniques can't begin to do. I don't know why but I tried the same images one day and it was really terrible and tried it another day and worked fine... it's supposed to be AI so maybe it learned something?

Jpeg to RAW was included in the package I bought and I can't say much about it. It refused to open. What it is designed to do is take a jpeg and bring back some of the colour range and information that gets strips away when compressing to jpeg so you can edit in a RAW processor with much better success. I did contact Topaz and they got right back t me, acknowledged the problem and said a fix was in the works and would send me a message when it was ready. Disappointing but also the customer service was awesome.

Another issue was integration with Affinity Photo. It can do it... but not if you bought the app from the Apple App Store. This is a problem with other plugins as well and the reason when Affinity goes to Version 2.0 and charges for updates I'll buy directly from them. I find the Apple Store updates lag behind the ones directly from Affinity by up to a couple days as well. Luckily,  the Topaz Plugins also work as independent applications

4x enlargement with original for scale. 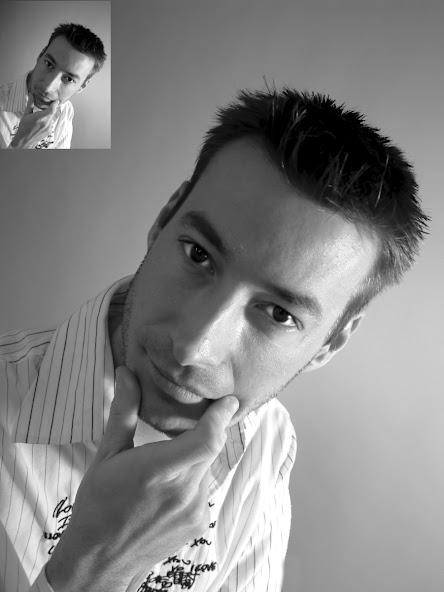 I don't really understand all this as I don't do things with photos other than to reduce their resolution or adjust contrast at best. That is a nice photo of Robin, though!

That photo is 18 years old and was taken in my Boston studio! The gigapixel plugin might be of use to you if you have older digital images that are too small to print the size you want. Thought you could just send them to me and I'll enlarge them for you.