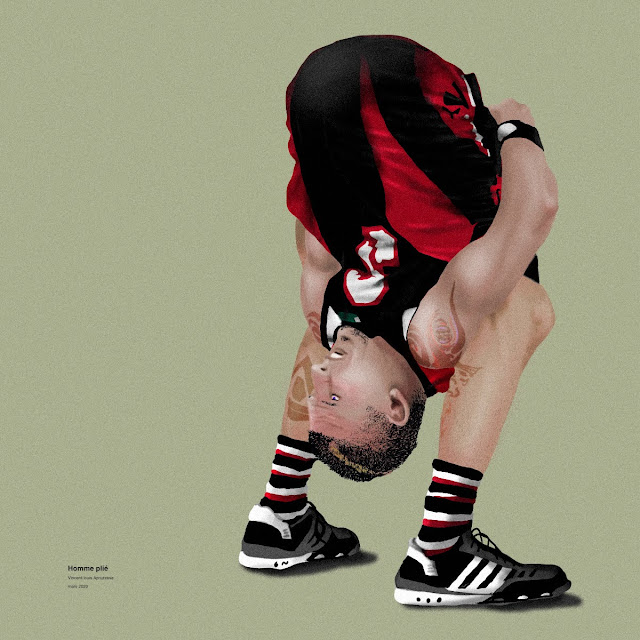 Not being able to sleep much has it's advantages. I finished this drawing this morning and I am pretty happy with it overall. I did not just adjust the greyscale to produce colour this time and painted with colour as well, especially for adding additional red tone to the skin on the face to show the blood rushing to his head.
Posted by Behemoth media at 06:02 3 comments: 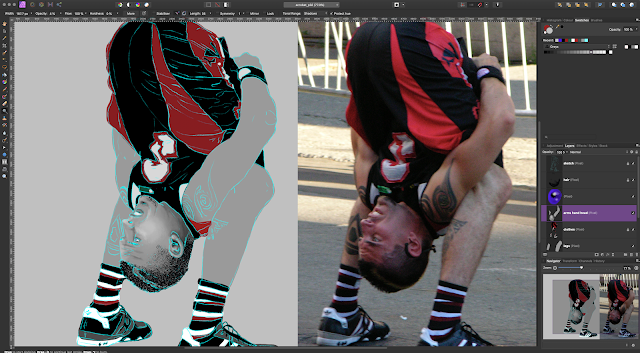 I don't really think anyone is all that interested in my process, but I have been posting more lately, both here and at Celluloid Slammer since it might give my 1-3 readers something to distract themselves for the current drama going on around us all.

The software is Affinity Photo which I find works well for my colour stuff. This is pretty typical of my set up. There is a blue pencil guide sketch to help me keep in mind the entire structure of the drawing. Under that are layers for the skin areas (head and arms, another is legs) and another with the clothing. I often work 100% in greyscale so I can recolour it later with HSL adjustments. It is easier for me than using coloured brushes. I think its because my background in physical paining is so limited and my pencil and ink stuff makes up most of my work. So it's unusual for me to have blocked out the red, black and white areas of the clothing. I just thought, given the extreme pose, it would be easier for me to visualize as I progressed.

I have not decided exactly how to do the tattoos, but I think on a separate layer and then using a blending layer to integrate them on the skin. The hair was black so I used pen techniques for that.

I think once the skin parts are done the rest will come together quickly. For some reason I have had luck with cloth folds and can do them fairly confidently. This was started a month ago and with all that is going on (including my dog dying) I just have not been able to focus on anything for more than a couple minutes at a time. 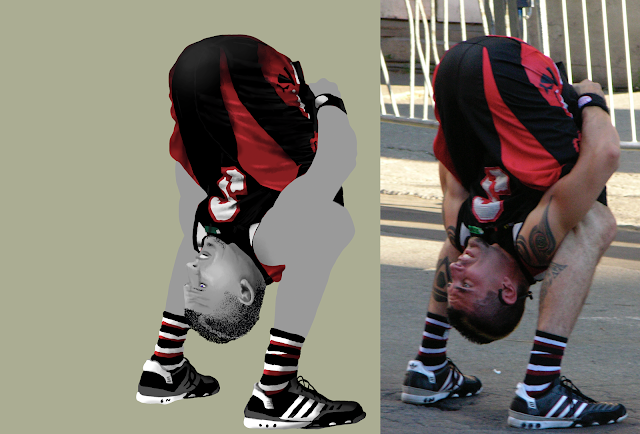 Went out this morning with the tripod and was able to just take photos in the middle of the street with zero danger of a car, or even a person getting in the way. 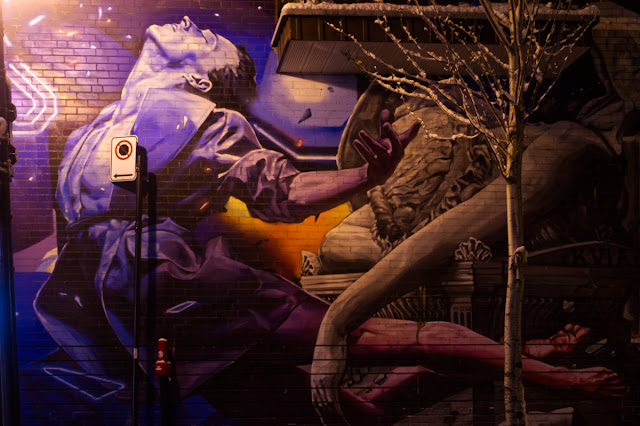 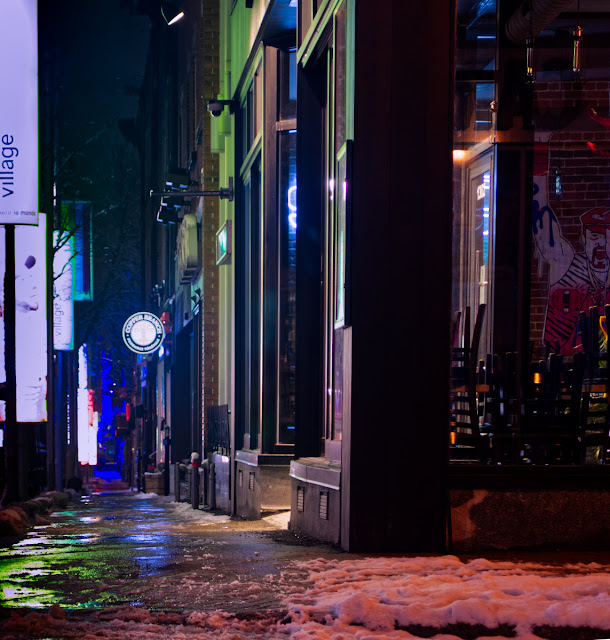 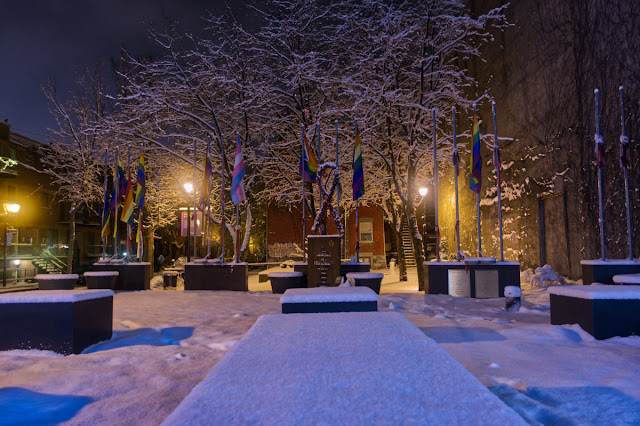 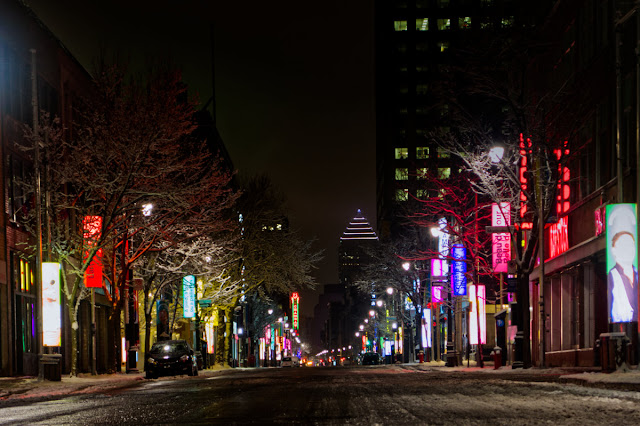 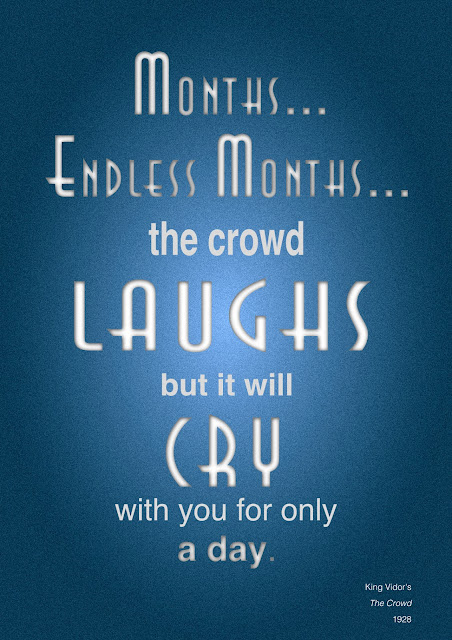 Another in my sometimes series of turning a citation into a poster-like graphic. This time is is from a title card in King Vidor's silent film, The Crowd which is personal favourite of mine. Made in Affinity Designer.
Posted by Behemoth media at 20:01 No comments:

Photos from a closed city 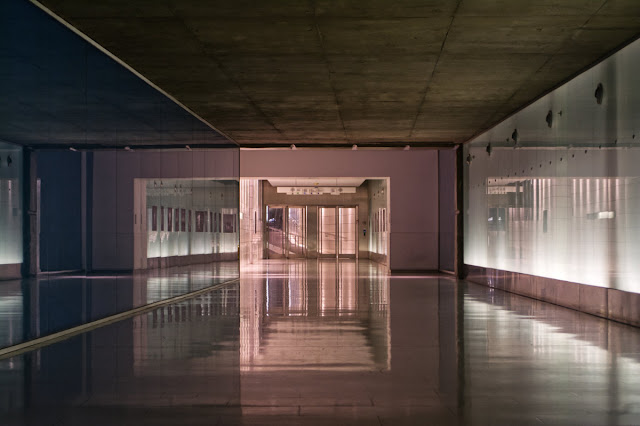 Montreal is closed down like many other places so I was able to go out during the morning rush time and take photos with no one, literally no one around. The underground corridors for the Metro were empty of everything except the sound of a howling wind. Where that sound came from as it's underground. 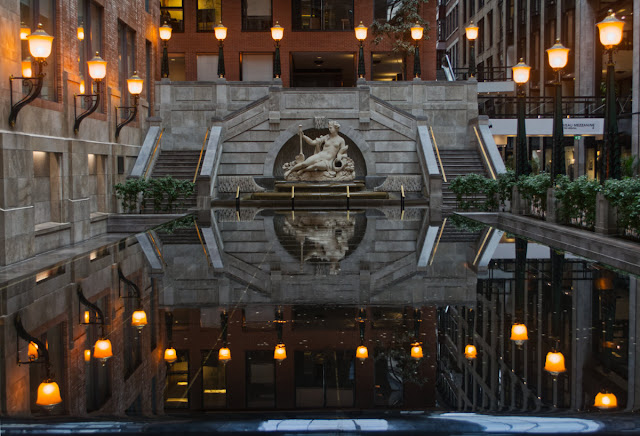 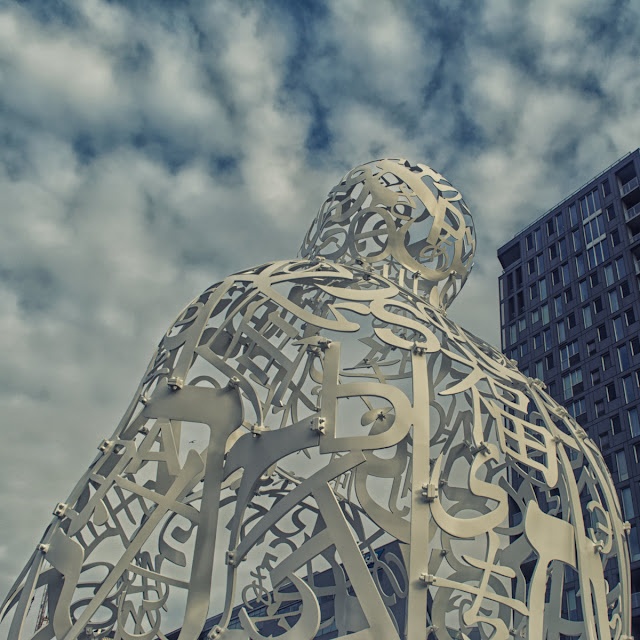 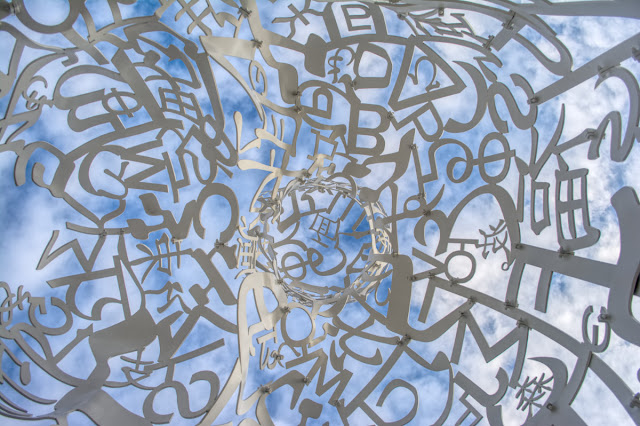 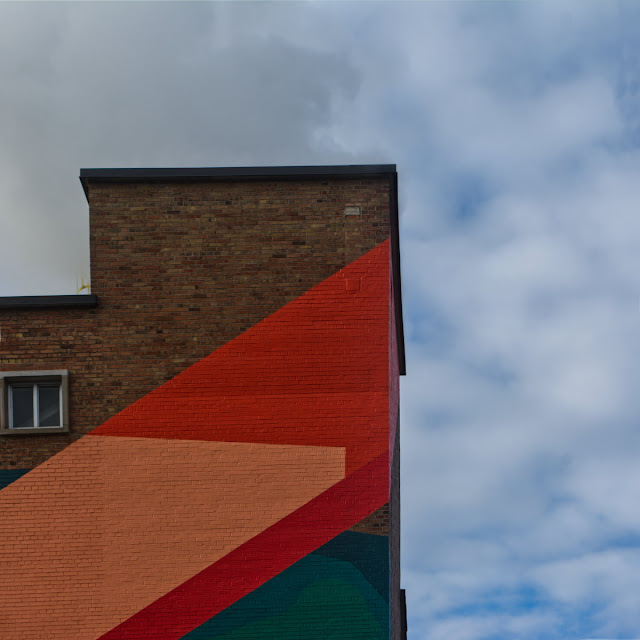 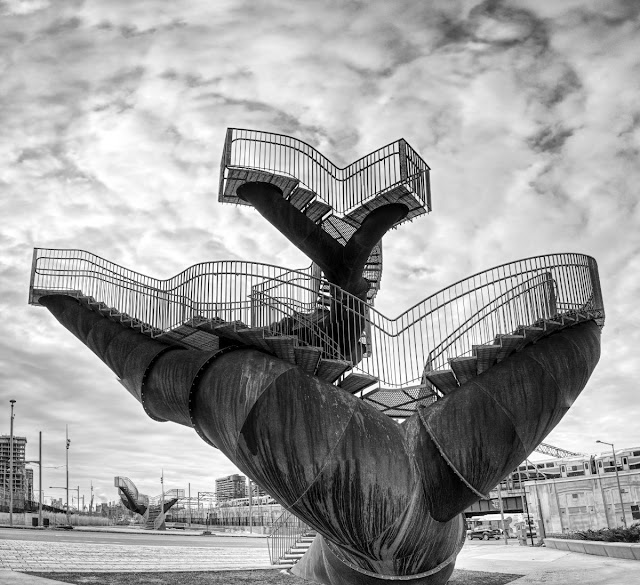 Short intro project for my nephew

My nephew is home from university, like the ret of the world and asked me to do this 30 second animation for him so, of course, I did. Lighting was a challenge for some reason, I need to think more about making lightbulbs look like they should. I added little details like the fans move at different speeds and dust particles in the air but tried to keep it simple. There is a slight camera shake to keep it looking less mechanical.
Posted by Behemoth media at 11:10 2 comments: 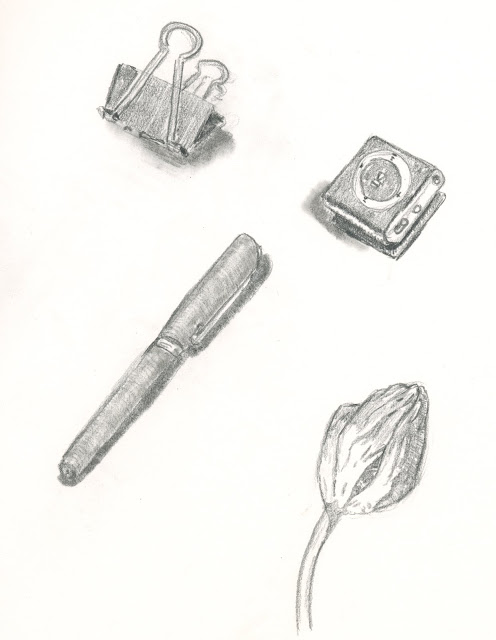 I am ashamed to say I haven't drawn on paper in years now. It simply isn't as easy as doing it on a computer terms of setting up and materials needed. The image above is from a new sketchbook I got for the holidays and was rendered with Ebony pencil on paper - the subject... just things within reach.

Drawing in real media does have its set backs but it also has many advantages... it's more tactile, your ability to see something in front of you and render it live and quickly is a great tool for improving how you draw and see the world. The limited ability to correct mistakes or zoom in 500% for details make sys pat closer attention to what you are doing and as a result, you learn more about the subject and how to represent things in the real world as art.

Oddly  it didn't feel weird sitting down at my drawing table, located next to tay computer desk to remind me I should be using it, in the slightest.  This is not high art or even great sketching but I am happy I didn't completely "lose it" and am surprised and happy that what I drew looked somewhat like what I was drawing.
Posted by Behemoth media at 11:13 6 comments: 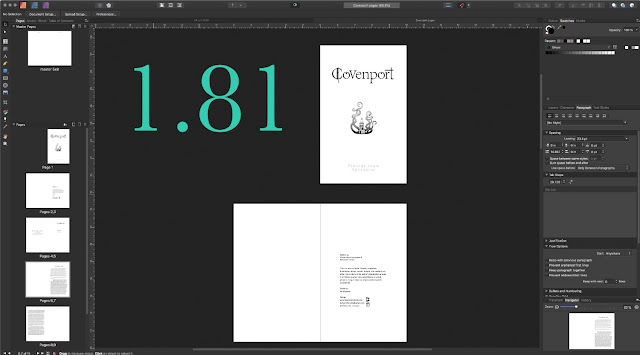 While at first glance, this update does not seem like more than a small update and that is true concerning the Photo and Designer apps. Both did get some nice new interface updates and a couple new features but Publisher got its first real update since its release in the summer and the additions to that are amazing.

I started using Publisher in my professional work a few months back after consulting with the print houses my clients use and doing a couple test projects. While it wasn't flush with features I found that I stopped using Indesign right away and haven't touched it much since. This update really makes the idea of going back seem even less likely.

Affinity listened to what people were after and did a good job fulfilling their desires in this release. The big addition is .idml import of Indesign project files, something many designers  found crucial before switching as access to old projects is key for keeping some clients. Quark Xpress added this function not too long ago but that was about the only good thing I could say about that application.  The new open dialog which allows you to save projects as templates that can be used across the suite  and saved to the cloud for easy access if you are caught out of the studio and need to create something before you can get back. I plan to use use templates quite a bit for my regular clients. There is also anew ability to merge documents into one which combines the master pages and table of contents which will be great for complicated projects like magazines which could now be worked on in sections, then combined to a final version later.

Photoshop smart objects are now imported and translated to Affinity Photo pretty seamlessly making cross application work much easier and crosses off another big Photoshop feature the Affinity was lacking.

There really isn't much reason to not switch to Affinity if you have been waiting to do that and I suspect when the iPad version of Publisher is released, having the suite will be essential for  graphic artists.

Posted by Behemoth media at 14:54 No comments: